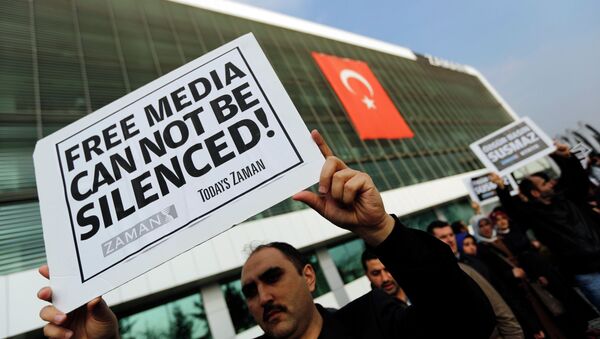 The Turkish president is cracking down on followers of Hizmet, a movement started by the Turkish Islamic scholar and preacher Fethullah Gülen.

According to Reuters, a crowd outside the Istanbul offices of the newspaper Zaman in Turkey chanted: "The free press cannot be silenced," as newspaper editor Ekrem Dumanli challenged the police to arrest him. "The person to be detained is waiting here. Please come and get [me]. I'm waiting for you here," he said in a speech to supporters.

The agency reports that 23 people were detained nationwide in simultaneous police operations, and arrest warrants were issued for 32 people in total. Those arrested include two former police chiefs and the executive director and scriptwriters of a television channel. An editor of the newspaper Zaman told Reuters that documentation shown by police to justify the raid cited the charge of "forming a gang to try and seize state sovereignty."

Erdogan Says Arming Syrian Opposition Not Enough, Assad Must Be Toppled
The move comes after President Erdogan warned on Friday of a strike against Gülen and his sympathizers from the social movement Hizmet, who according to a report from Al-Akhbar, he called a "parallel structure," representing a threat to the country. "I want my dear nation to know that we are not just faced with a simple network, but one which is a pawn of national and inter-national evil forces," the president said in a speech to a business forum in Ankara.

Corruption investigations carried out in December of last year into Erdogan's associates were derided as "political plotting," by the president, the BBC reported, and he responded by firing five police chiefs responsible for the raids on his inner circle for "abuse of office." The corruption probe resulted in the detention of 52 of the president's associates in business and politics, and Erdogan responded by conducting raids which targeted Gülen and his followers.

Gulen's influential faith-based movement Hizmet was previously allied with Erdogan's AK Party, in a broad coalition of religious, business and working-class elements. Towards the end of last year Hizmet, whose members are said to hold influential positions in Turkey's state institutions, became estranged from Erdogan's government.