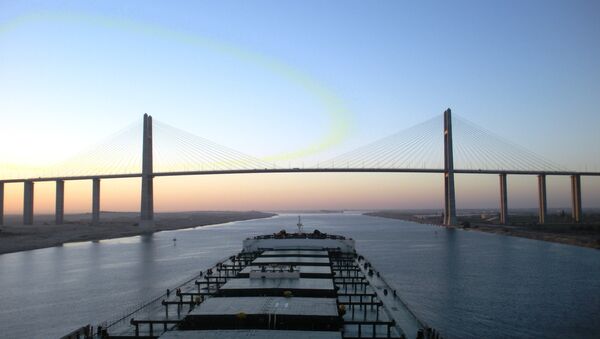 A cargo ship collided with a small Egyptian fishing vessel Sunday morning in the Gulf of Suez; 14 people of the 40 person crew have been rescued, with 13 others confirmed dead.

MOSCOW, December 14 (Sputnik) — Thirteen Egyptian fisherman are said to have been killed and 13 others reported missing after their small boat collided with a passing cargo ship in the Gulf of Suez early on Sunday, Egyptian security and hospital officials have said, according to Agence France-Presse.

Fourteen of the 40-person crew of the fishing vessel Badr were pulled from the water in the Gulf separating the Egyptian mainland and the Sinai Peninsula, AFP reported. The boat’s all-Egyptian crew is said to have hailed from the country’s northeastern al-Dakahlia province.

“We received an SOS signal early Sunday from fishermen working in the Red Sea saying that a fishing boat has sunk with 40 fishermen on board,” Bakri Abu al-Hassan, the Red Sea director of Egypt’s main fishermen’s trade union said, as cited by the Turkish press agency Anadolu. “The boat sank after a cargo ship coming from the Suez Canal crashed into it,” he added.

Up to ten boats were said to be in the area assisting in the search and rescue operation, with Egyptian naval, security and medical teams involved, Egyptian daily al-Ahram explained. One of the survivors noted that he had jumped from the collision-bound fishing vessel shortly before the accident, and clung to a wooden crate for four hours before being rescued.

Conflicting reports exist about the number of people on board the vessel, as well as the number of people that are missing or have been killed or rescued. Al-Arabiya noted that Hassan had told the local media that the number of missing persons was 18, with 11 rescued, some in serious condition, while 11 bodies had been pulled from the water. Meanwhile the Associated Press had reported that 45 fisherman had been on board the Badr, and that 23 of them are listed as missing.

The Panamanian-flagged cargo ship involved in the accident had initially failed to stop following the accident, doing so only later at the port of Safaga in southeastern Egypt, south of the Gulf, according to Abdel Rahim Mustafa, spokesman for Egypt’s Public Authority of Red Sea Ports, the MiddleEastEye explained.

The Gulf of Suez is one of the main trade routes in the world, linking Asia and eastern Africa to Europe via the Suez Canal. MiddleEastEye explained that the heavy congestion of Egypt’s waterways make them a likely place for accidents. The perceived danger of causing further accidents may explain why the Panamanian-flagged ship had decided to stop in the Red Sea, outside the narrow Gulf.