In March for Change: US Protesters Call for Police Reforms 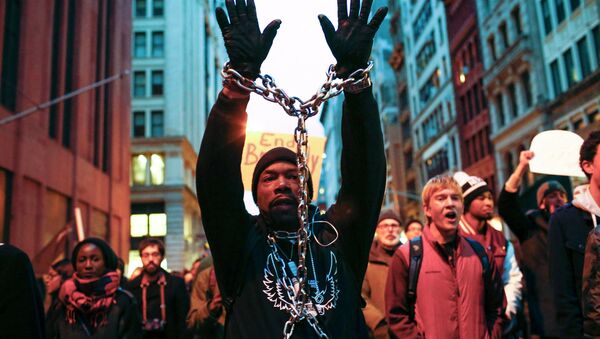 © REUTERS / Eduardo Munoz
Subscribe
International
India
Africa
Tens of thousands took to the streets across the US on Saturday to protest police brutality, calling for long-term changes within the police and amendments to US legislation.

MOSCOW, December 14 (Sputnik) – Tens of thousands of people marched throughout the US on Saturday, calling attention to the deaths of unarmed black Americans and the excessive use of force by police, calling for lawmakers to take action. 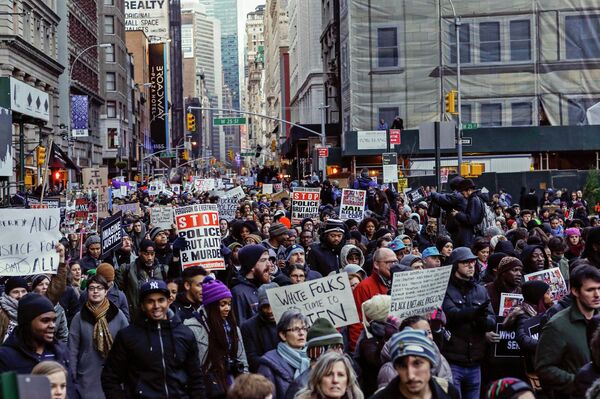 According to police estimates, at least 25,000 rallied outside New York Police Department (NYPD) headquarters in New York City demanding long-term changes within the police. But organizers say that between 30,000 to 50,000 people took to NYC streets on Saturday.

"Bill De Blasio, the mayor [of New York] needs to know, he has to get the NYPD under control. It's the people of New York who voted him into office — not the NYPD," a local Puerto Rican, Oscar Martinez, told Sputnik on Saturday, after participating in a four-hour protest march against police brutality that took place in the city.

Mayor De Blasio, Congress and US President Barack Obama are all aware of the systemic racism that exists within the law enforcement system, but have failed to take meaningful action, Martinez stressed. 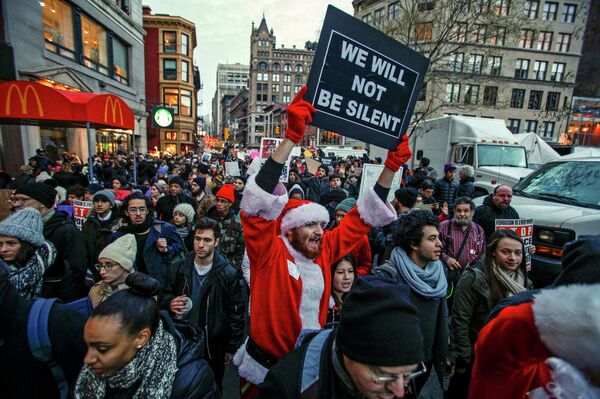 "So we are counting on the [New York] Governor to do something about it, and to get some order in the NYPD," the protester explained, saying that first of all the authorities need "to indict and bring charges against the officer who brutally murdered this unarmed black man in the street".

"We have been harmed and we are just asking for corrective action. We are calling on the NYPD to stand up to who they say they are and live up to their motto of 'Courtesy, Professionalism and Respect', which seems to me to be a reasonable demand," another protester, Headley, told Sputnik.

"There is a systematic murder of people of color in this country and it's institutionalized racism. The people are here to convince the people in power to legislate against this," a man attending the rally told CBS radio station WINS-AM in New York, without giving his name. 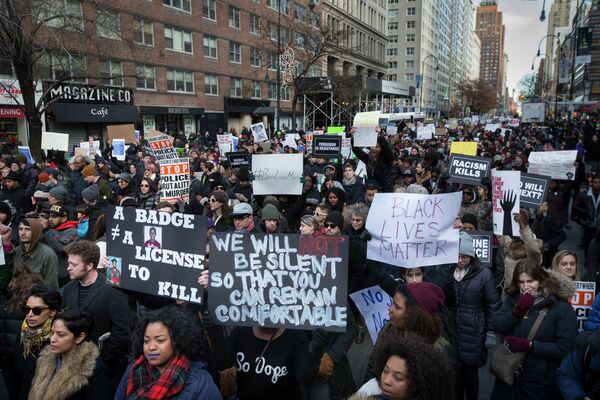 Demonstrators march in New York, Saturday, Dec. 13, 2014, during the Justice for All rally and march
© AP Photo / John Minchillo

Thousands also marched through the streets of Washington DC on Saturday, calling for changes to US legislation. Organizers had predicted that 5,000 people would participate in the march, according to CBS News, but the turnout is reported to have been far greater. Although Washington police have not released the numbers, the organizers’ estimates suggest there were also up to 25,000 people.

"What a sea of people. If they don't see this and make a change, then I don't know what we got to do. Thank you for having my back", Lesley McSpadden, mother of Michael Brown, the young man who was fatally shot in Ferguson by a police officer, told the crowd.

LIVE UPDATES: No incidents yet. There was more violence at St.Patrick's parade. But night is young #BlackLivesMatter pic.twitter.com/cA1O61pYVe

"Members of Congress, beware… we're serious…," CBS News quoted the civil rights leader Al Sharpton as saying. "When you get a ring-ding on Christmas, it might not be Santa. It may be Rev. Al coming to your house."

Overall, the protests across the country remained mainly peaceful on Saturday.

The mood in the US capital, for example, was described as calm but defiant, with a large number of police on standby. 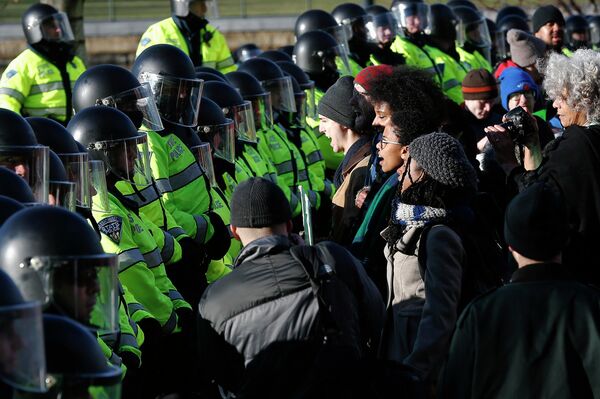 Demonstrators face a line of police officers during a demonstration against recent grand jury decisions not to indict police officers in the deaths of Michael Brown and Eric Garner, in Boston, Massachusetts December 13, 2014
© REUTERS / Brian Snyder

In Boston, State Police arrested 23 people participating in a protest that drew about 1,000 to the city’s downtown on Saturday afternoon, The Boston Globe quotes Colonel Timothy P. Alben, superintendent of the State Police, as saying.

Most arrests occurred in front of the Suffolk County Jail on Nashua Street after demonstrators tried to shove past a line of troopers and into Leverett Circle, Alben said.

According to the police, the New York campaign also remained peaceful and was better-planned than similar events.