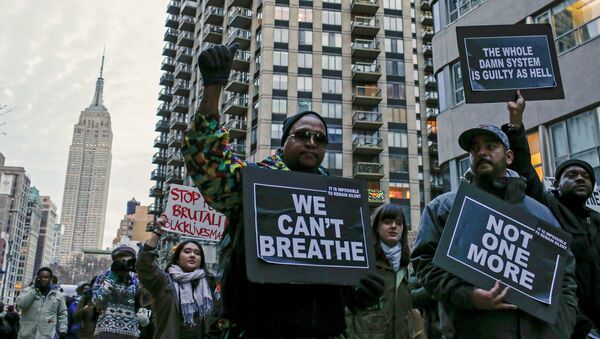 Family members of victims of US police violence led a march against police brutality, which follows recent grand jury decisions not to indict white policemen who killed two African-American men in separate incidents this summer

NEW YORK, DECEMBER 14 (Sputnik) – Family members of victims of US police violence led a march of tens of thousands of people in central Manhattan, which follows recent grand jury decisions not to indict white policemen who killed two African-American men in separate incidents this summer.

"Police in this country are given a gun and a badge and they think they can abuse their authority," Cynthia Howell, whose aunt, Alberta Spruill, 57, died from a heart attack after police mistakenly lobbed a stun grenade into her apartment in 2003, told Sputnik Saturday.

"It's like a modern-day lynching. And we sit back and look at the government, asking when they're going to intervene," Howell, who was among the relatives who led the NYC protest action, said.

The woman stressed that US citizens should not have to fear that they can become victims of police abuse at any moment in their day-to-day life.

"We should be able to walk these streets without being harassed at will, when they want to harass because they feel they can," Howell told Sputnik.

The Brown incident was similar to the killing of African-American teenager Trayvon Martin in Florida in 2012. Another unarmed African-American, 12-year-old Tamir Rice, was shot dead by police in Cleveland in November, 2014.

The incidents have sparked nation-wide protests against racial injustice within the US law enforcement.