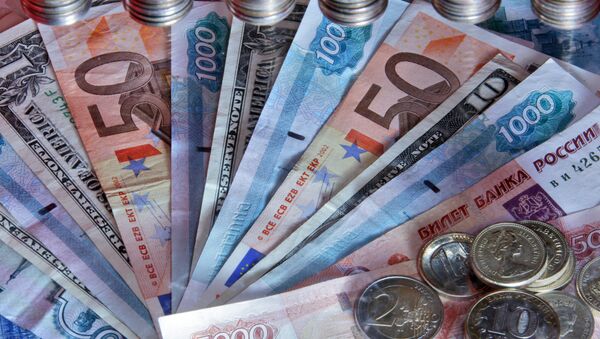 The ruble continues to fall and the Russian Central Bank has intervened to raise interest rates.

What Happened to Russia’s Ruble and Where Do We Go From Here
MOSCOW, 13 December (Sputnik) – The ruble continued its decline against the dollar and euro on Friday, in spite of the Central Bank of Russia’s announcement on Thursday that it would raise interest rates by one percent.

According to official figures from the central bank, the value of the dollar rose from 54.79 rubles on Friday to 56.89 rubles on Saturday, while the euro rose from Friday's 68.29 rubles to 70.53 rubles for Saturday. The value of its currency basket, which measures the ruble against 55 cents of the dollar and 45 eurocents, rose to 63.03 on Saturday, from Friday's 60.87.

The fall comes despite a rise in the key interest rate from 9.5% to 10.5%, which was announced by the bank in a statement on Thursday. The bank added that that the yearly inflation rate of consumer prices was 9.4% on December 8, while base inflation in November rose to 8.9%. "The bank's decision is intended to secure a slowing in the growth of consumer prices to the level of 4.8% in the medium term," it declared, adding that it is ready to continue increasing the rate in the event of the further intensification of inflationary risks.

Russia's Peak Inflation Expected in Q1-2015: Central Bank Official
Stocks on the Moscow Exchange also fell in value on Friday, with the RTS dollar index closing at 799.18 points, down 3.01% from the previous close and having fallen by 16.61% last month. The MICEX ruble index rallied on Friday to close at 1,455.04 points, up 0.32% from Thursday’s close. The index has fallen 7.52% in the last month, according to statistics from the exchange.