Obama Undecided Over Signing of Bill to Ramp Up Sanctions: White House 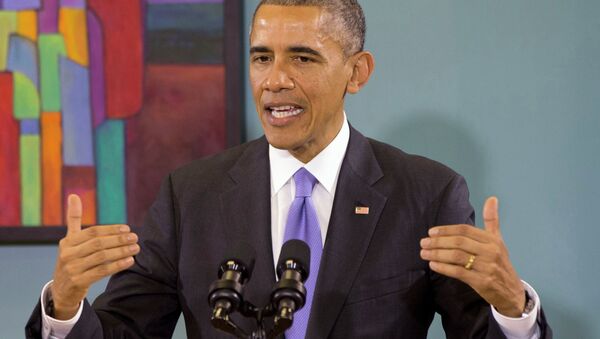 © AP Photo / Jacquelyn Martin, File
Subscribe
White House press secretary Josh Earnest stated that US President Barack Obama has not yet decided to approve the bill, recently passed by the US Senate, which will impose additional sanctions on Russian and provide lethal aid to Ukraine.

US Senate Passes Bill to Arm Ukraine, Impose Sanctions on Russia
WASHINGTON, December 12 (Sputnik) — US President Barack Obama has not yet made a decision to sign legislation, passed yesterday by the US Senate, that would impose harsher sanctions on Russia and provide lethal assistance to Ukraine, White House press secretary Josh Earnest said Friday.

"We are looking at it right now. We still need to take a look at this piece of legislation before we are going to articulate a specific position on it," Earnest said.

Earnest said that while the Obama administration remains concerned about Russia's actions in Ukraine, the US goal is to hold together a united front with the European Union and other countries sanctioning Russia.

EU to Extend Sanctions Against Crimea Next Week: European Diplomats
"The key to success when implementing these kinds of sanctions is to get other countries to go along with it," Earnest said. "If it's only the United States that's imposing these sanctions unilaterally the sanctions regime is not going to have as powerful an impact."

The US Senate on Thursday passed legislation, "Ukraine Freedom Support Act," that will provide lethal and non-lethal aid to Ukraine, as well as impose harsher sanctions, targeting Russia's energy, finance and defense industries. The bill still needs to pass the US House of Representatives before it would be sent to the president's desk for signature and become law.

The sanctions would be in addition to those already imposed by the United States on Russia over Moscow's alleged involvement in the Ukrainian crisis, which Russia has denied repeatedly. The European Union has implemented similar sanctions against Russia, but the proposed Senate legislation could unravel European and US joint action.

Responding to the bill on Friday, Russian Foreign Ministry spokesperson Alexander Lukashevich criticized it sharply and called the US Senate's actions "confrontational."

Russia has repeatedly stressed that it is not involved in the Ukrainian crisis. In fact, Russia has contributed to bringing the conflict in the ex-Soviet republic to an end, as its representatives were present at a meeting of the Contact Group on Ukraine in Minsk, where a ceasefire deal was reached between Kiev and independence supporters.