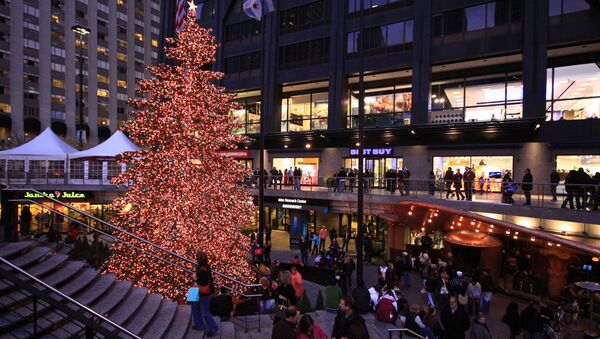 © Sputnik / Denis Voroshilov
Subscribe
The US economy is currently experiencing one of the slowest recoveries in the last 70 years and the wealth inequality has widened along racial and ethnic lines.

US Leaves Criminals Behind, Torture Practices Unpunished: Frank Rich
WASHINGTON, December 12 (Sputnik) — The wealth inequality gap between the White population and minorities in the United States is increasing despite the country’s economic recovery, the Pew Research Center said in a report Friday.

“Even as the economic recovery has begun to mend asset prices, not all [US] households have benefited alike, and wealth inequality has widened along racial and ethnic lines,” the report published on the center's website stated.

World Private Household Wealth Grows at Fastest Rate Since 2003: Allianz
“Our analysis of Federal Reserve data does reveal a stark divide in the experiences of white, black and Hispanic households during the economic recovery,” the report said.

The report stated that the current incomes gap between white and black households in the United States has reached its highest point since 1989, when white households at one point earned 17 times more than black households.

According to the report, the widening income gap is a result of US minority households reducing proportionally greater ownership of assets than white households since country’s economy began recovering, the report said. The assets included homes, stocks and business equity. The report also found that during the economic recovery, Hispanic and black households in particular may not have been able to replenish their savings.

Starting from late 2007, the United States experienced a global financial crisis, which affected financial institutions all over the world.

The US economy is currently experiencing one of the slowest recoveries in the last 70 years, with about 6.9 million fewer Americans working or are looking for work, according to a September 2014 report by the Heritage Foundation public policy think tank based in Washington D.C.