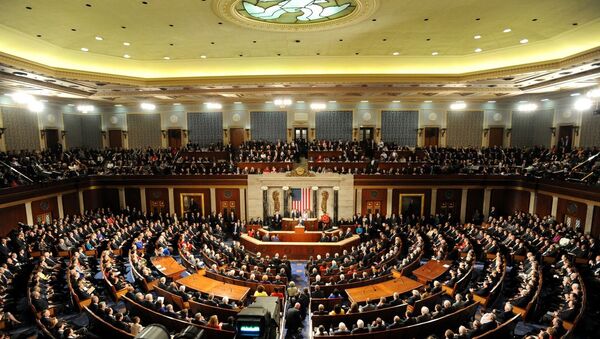 US Senate Passes Bill to Arm Ukraine, Impose Sanctions on Russia
MOSCOW, December 12 (Sputnik) — Moscow sharply criticized on Friday the adoption of a US Congress bill aimed at providing lethal and non-lethal aid to Ukraine and imposing additional sanctions against Russia.

"The Ukraine Freedom Support Act approved by both houses of the US Congress without debate and proper voting cannot cause anything but deep regret as it bears an openly confrontational nature," Foreign Ministry spokesperson Alexander Lukashevich said in a statement.

The bill has yet to be passed by the US House of Representatives and signed by US President Barack Obama. The legislation comes three months after Ukrainian President Petro Poroshenko's plea for weapons to fight independence supporters in the country's East.

The bill also contains provisions that will expand sanctions against Russia.

US Congress to Pressure For Lethal Military Aid to Ukraine: Senator McCain
In the statement, the Russian deputy foreign minister stressed that "global security challenges" required "a joint effort" from Russia and the United States, something that could not be achieved as long as Washington was trying to "turn back the clock" and undo all that had been done over the previous decades of bilateral cooperation.

"The US lawmakers, following the steps of the Barack Obama administration, are doing their utmost to destroy the carcass of cooperation [between the two countries]," Lukashevich said.

"It's about time the US congressmen abandon illusions about the effectiveness of their sanctions campaign against Russia. We will not give in to blackmail, we will not forsake our national interests, and we will not allow any interference in our internal affairs," the diplomat stressed.

In recent months, the United States and European Union have introduced several rounds of sanctions against Russia, targeting its banking, energy and defense sectors. The West says the measures are aimed at making Russia change its stance with regard to Ukraine, an ex-Soviet republic that has been gripped by an internal conflict since April.

Russia has repeatedly denied any involvement in the Ukrainian crisis, stressing that sanctions are counterproductive and threaten international stability.