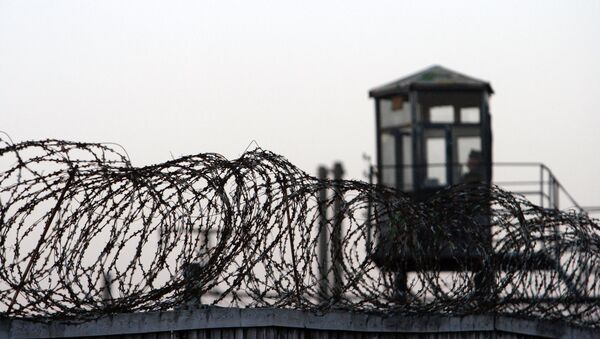 © Sputnik / Ivan Rudnev
/
Go to the mediabank
Subscribe
International
India
Africa
The new legislation, passed by the Ohio Senate, will allow law-enforcement officers to resume executions in the state.

"We're doing what we think is right," chief counsel for the Summit County Prosecutor's office, Brad Gessner, said cited by the news agency. "I'm confident that it falls well within the constitutional scope of our authority," he added.

US House of Representatives Approves Budget Bill Averting Gov't Shutdown
The new legislation will guarantee that the names of lethal drugs’ producers will be covered up in order to avoid persecution. As stated by the new law, they can be released only 20 years after the companies’ last supply of drugs to the state.

Ohio’s next detainee to be executed is 41-year old Ronald Phillips, sentenced to death for sexually assaulting and killing his girlfriend’s 3-year old daughter in 1993.

US Senate Passes Bill to Arm Ukraine, Impose Sanctions on Russia
The new legislation is likely to cause waves of criticism among EU countries, who strictly oppose capital punishment and consider the death penalty inhuman.

"We believe that the elimination of the death penalty is fundamental to the protection of human dignity, and to the progressive development of human rights," said EU spokeswoman Catherine Ray, cited by Fox News.

Ohio temporarily gave up executions of prisoners in January, after detainee Dennis McGuire suffered terrible agony before dying, choking and gasping for 26 minutes after drugs were injected into his body, according to the newspaper. The combination of lethal drugs used in McGuire’s case was never tested before and made the execution a long-lasting torturing punishment.

Following a federal lawsuit filed by McGuire's family, US federal judge Gregory Frost ordered a month-long moratorium on all executions in Ohio to allow the state to come up with a new lethal injection procedure. The moratorium was later prolonged until January 15, 2015.