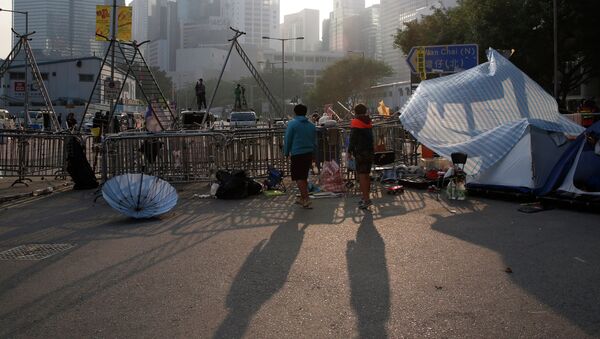 "Scholarism [student activist group], in close cooperation with Student Federation will continue to fight for true universal suffrage," Wong was quoted as saying by the radio station, as police terminated the 75-day occupation of roads surrounding the local government headquarters by protesters on Thursday.

However, Wong stressed that no upcoming protests were planned.

Hong Kong Police Begin Arresting Protesters in Occupy Dismantling Operation
On Thursday, Hong Kong police began a large-scale operation to dismantle barricades put up by the protesters. According to local media outlets, about 100 protesters refused to leave, staging a sit-in. Some had to be carried off the site by the police officers and over 200 were arrested.

Hong Kong's Occupy Central campaign with protesters calling for fair elections for began in September, following Beijing's decision to screen candidates the special administration region's chief executive in 2017. The demonstrations led to numerous arrests and clashes with the police.