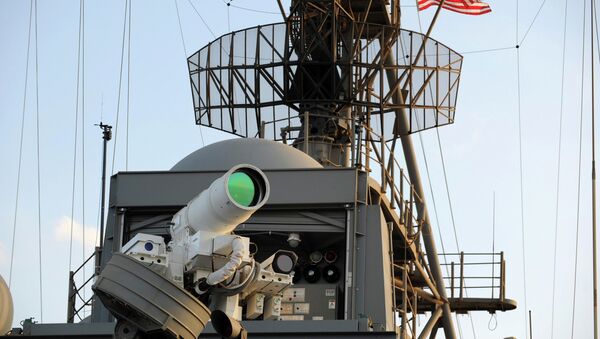 © REUTERS / John Williams/U.S. Navy
Subscribe
According to a naval analyst at the Institute for the Study of War, the recently deployed US Navy laser weapon systems (LaWS) are unlikely to bring immediate significant changes, but it will raise range, accuracy, lethality and reliability of naval weapons.

US Navy Deploys Laser Weapon System in Persian Gulf
NEW YORK, December 12 (Sputnik) – A new US Navy laser weapon system (LaWS) is unlikely to bring immediate drastic changes, but could be the future of naval warfare, Christopher Harmer, a naval analyst at the Institute for the Study of War, has told Sputnik.

"In the short term, LaWS will not be a game changer. It is really still in its infancy as a weapons system — it has never seen combat, and as with most weapons systems, testing has been conducted under controlled conditions," Harmer said Thursday.

According to the expert, the laser system needs to be deployed on a ship for six months so that its "true capabilities" are revealed.

"We need to know how reliable it will be and how hard it will be to maintain the system at sea," Harmer stressed, adding, however, that LaWS could be the beginning of lasers' future dominance in the sphere of naval weaponry.

"The existing naval weapons systems, small-calibre cannon, large-calibre naval guns, and missiles, are at or near the limits of their potential capability. Guns and missiles just aren't going to get much more accurate or lethal," Harmer told Sputnik, adding that, in contrast, "lasers have significant potential for increases in range, accuracy, lethality, reliability, and cost-effectiveness".

China Successfully Develops Laser System Able to Shoot Down Drones: Reports
"For now, LaWS will simply supplement existing gun and missile systems. At some point in the future, navy ships will be entirely or primarily equipped with lasers," Harmer concluded.

On Thursday, the Office of Naval Research (ONR) announced that the US Navy had successfully deployed and operated LaWS for the first time aboard a naval vessel in the Persian Gulf.

The system, operated by a video-game like controller, hit a range of moving targets, spanning from small boats to unmanned drones during demonstrations in September and November.

The US Navy has said it will determine next steps for LaWS after analyzing the data from the most recent demonstrations.