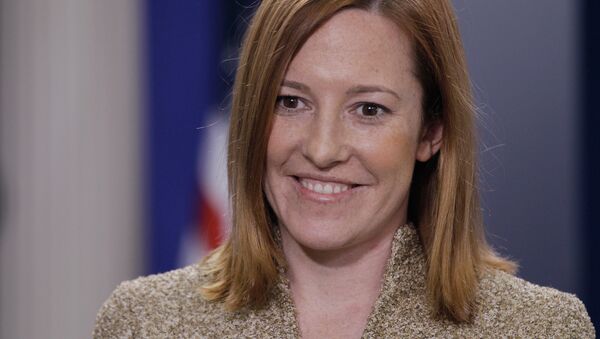 According to spokesperson for the US State Department Jen Psaki, the US-Armenia relationships will remain unchanged after Yerevan will enter the Eurasian Economic Union (EEU).

"The United Sates will continue to work with Armenia to support democratic and economic reforms and preserve the progress made through the US-Armenia relationship," Psaki said at a press briefing Thursday.

The spokesperson emphasized that all countries have the right to choose their own path of economic integration and development in accordance with their national interests.

"No country has the right to determine the political and economic orientation of another country, nor decide which alliances and trade agreements it can join," Psaki stressed.

The Russian State Duma (lower house of parliament) ratified the treaty on Armenia's joining the EEU on December 10. Yerevan is expected to officially join the union in January, 2015 when the ratification procedures are finished. The republics of Kyrgyzstan and Tajikistan have also expressed interest in joining the organization.

Russia, Belarus and Kazakhstan signed a treaty, establishing the EEU in May, 2014 and have already ratified the agreement, which will take effect starting next year.

The idea to create EEU, which would stretch from the edge of the European Union to China and establish a single economic market for over 170 million people, originated from the Customs Union between Russia, Kazakhstan and Belarus, created in 2010.

Meanwhile the European Union, as well as the United States and their allies, have been imposing economic sanctions against Russia in a bid to curtail its trade flows and prevent Russian banks from raising capital on foreign markets.