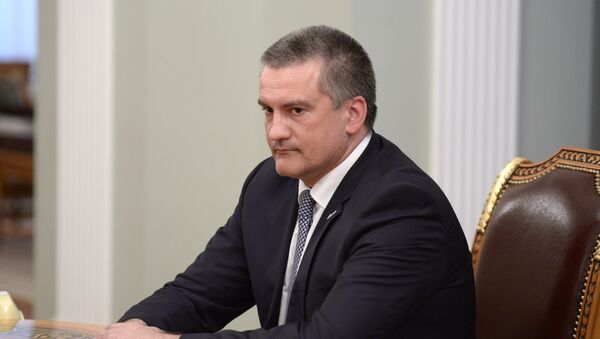 US Department of State spokesperson Jen Psaki said during a press briefing on Thursday that the US is troubled by reports on the head of the Republic of Crimea accompanying Russian President Vladimir Putin during his visit to India.

WASHINGTON, December 11 (Sputnik) – Washington wants an explanation as to why the Crimean leader, who is under international sanctions, visited India, spokesperson for the US Department of State Jen Psaki said during the press briefing on Thursday.

Russia, India Sign Agreement on Economic Cooperation in Crimea
“We are troubled by reports that the delegation, accompanying [Russian President Vladimir] Putin, may have included Sergei Aksyonov,” Psaki stated, noting that the Indian Ministry of External Affairs has said they were not officially aware of his visit or his participation in the delegation. “We are seeking further clarification on that,” Psaki said.

Currently, Russian President Vladimir Putin is on official visit in India. The two countries are expected to sign more than 20 deals. Crimean Leader Sergei Aksyonov arrived in New Delhi on Thursday. It is the first time an official from the Republic of Crimea has visited India.

Following the February coup in Kiev, residents of Crimea refused to recognize the legitimacy of the new Ukrainian government and held a referendum on reunifying with Russia. More than 96 percent of the Crimean voters backed the motion to secede from Ukraine and join Russia.