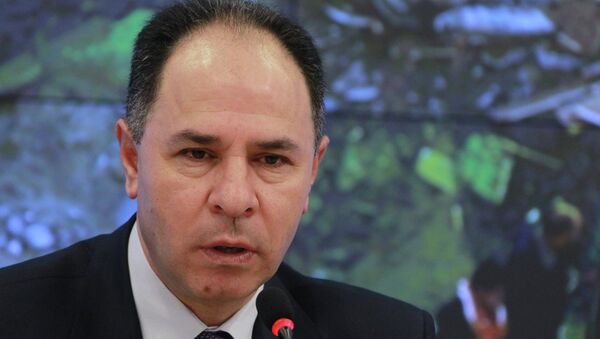 Palestinian minister had been badly beaten by Israeli police and exposed to tear gas. Palestinian Ambassador to Russia said that the autopsy showed clear signs of the "excessive use of force" against the deceased official.

"The tragedy once again unveils the true face of Israeli racism, unscrupulous in their means of suppressing protests, mercilessly punishing the young, the defenseless elderly, the women and children," Fayed Mustafa said.

The head of the Palestinian Authority committee against the separation wall and Israeli settlements, Ziad Abu Ein died in a clash with Israeli police during West Bank protests. Demonstrators were trying to plant olive trees on a patch of land near the Jewish settlement of Shiloh, which they feared would soon be annexed. During the course of the protests they were confronted by some 15 Israeli soldiers.

Fatah Denies Receiving Israeli Offer on Joint Probe Into Minister's Death
Fayed Mustafa said that the autopsy showed clear signs of the "excessive use of force" against the deceased official. Ziad Abu Ein had been badly beaten and exposed to tear gas. He died in an ambulance.

According to Fayed Mustafa, the situation surrounding the death of the Palestinian official shows that "the political establishment of Israel will stop at nothing to preserve and perpetuate the occupation of the Palestinian lands."

The ambassador added that Palestinians called for the international condemnation of the actions of Israeli police and that they would be calling on international organizations to introduce sanctions against Israel.