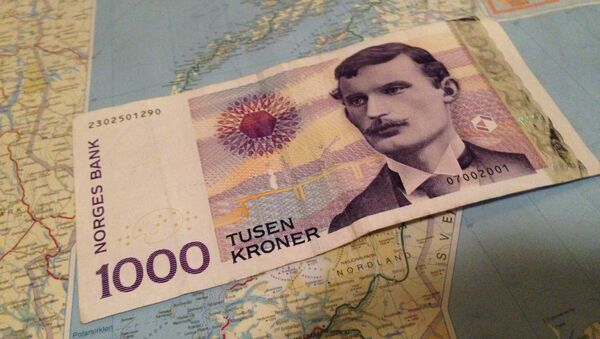 Norway's economic growth during the last two years has been lower than the average for the past 20 years.

Economic Growth in Europe Lower Than Expected: European Commission
MOSCOW, December 11 (Sputnik) — The weakening of economic growth has forced the Central Bank of Norway to curb its interest rate to 1.25 percent, a report issued on Thursday by the bank said.

"At its meeting on 10 December, the Executive Board decided to reduce the key policy rate by 0.25 percent-age point to 1.25%. At the same meeting, the Executive Board decided that the key policy rate should lie in the interval ¾% –1¾% in the period to the publication of the next Report on 19 March 2015, unless the Norwegian economy is exposed to new major shocks," the report states.

According to the report, the last two years' economic growth has been lower than the average for the past 20 years.

European Commission Fears Prolonged Low Economic Growth, Proposes Measures
The report also notes that the depreciation of the Norwegian krone is pushing inflation up, while at the same time driving oil prices down and engendering discouraging prospects for the country's economy.

The document adds that prospects for the Norwegian economy as a whole were down. Similarly, the Norwegian Central Bank estimates that oil prices and growth in private consumption and investments by the Norwegian will be lower in the long run.

Following the reduction in the key interest rates of Norway's Central Bank, the Norwegian krone plunged to its lowest level in the past five years, according to Market Watch. The Norwegian krone has depreciated by nearly 1.25 percent against euro, while since the beginning of the year the krone has dropped by 7.4-percent.