24 US States Challenge Obama on Immigration in ‘Courthouse Civil War’ 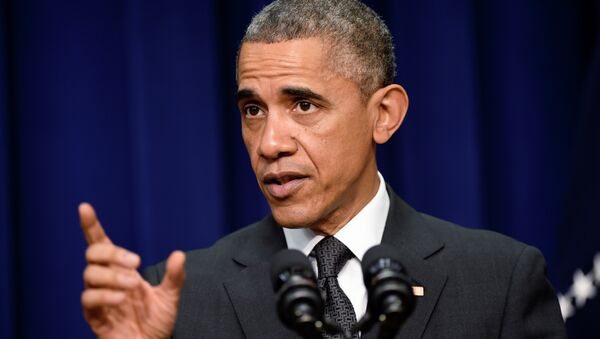 The Obama Reform on Immigration, albeit triggering a nation-wide standoff between liberals and conservatives, has proven so far that America remains true to its fundamental principle of a global ‘melting pot.’

MOSCOW, December 11 (Sputnik) — President Obama’s executive action on immigration, undertaken this November, has met stiff opposition from rural white America with 24 states, most of them ‘Red States’, united in the Texas-led coalition, suing Washington over what they believe to be an unconstitutional attempt at decriminalizing illegal aliens in America.

Obama: Future US Administration's Actions Can Be 'Damaging' to Immigration
Enacted by President Obama on 20 November, the reform on immigration provides roughly 5 mln (40%) of the about 13 mln undocumented aliens in the US an opportunity to stay, and has triggered a harsh resistance from American conservatives, who insist that the President’s job is to enforce the law, not create it. Texas is leading the legal action countering the President’s initiative, a rare post-Civil War precedent of an attempt at nullification, bringing about speculation of how acute the confrontation between the two Americas may be in terms of fundamental values, and how far the smoldering conflict can reach.

The difference in values between the innovative urban North and the traditional rural South have never faded away in American history, but during the last 15 years the ‘red states and blue states’ dichotomy has shifted from being strictly tied to geography. Today, states like North Dakota or even Michigan are mostly conservative, while urban areas in such famed strongholds of the Dixie values, like Dallas, TX, and Atlanta, GA, are avidly liberal. In short, the conservative white America is generally outside the city, no matter if it is geographically North or South (with only a few notable exceptions like New England). Meanwhile, the 2012 electoral victory of Barack Obama occurred due to the predominantly liberal stance of multiethnic ‘melting pot’ urban areas across the nation, including deep in conservative-dominated areas. Such examples include Cleveland, OH, Detroit, MI, Miami, FL, and Houston, TX, among others.

Obama to Veto Bill Restricting Executive Action on Immigration: White House
Texas has filed a lawsuit on December 3 against President Obama’s executive action on immigration, initially with the support of 13 states: AL, GA, ID, KS, LA, MT, NE, SC, SD, UT, WV and WI, along with the governors from three more states, namely MS, ME and NC. The suit was filed in a federal court in Texas’ Southern District. These states allege that President Obama abused his authority by circumventing Congress when pushing through the legislative initiative,

"President's job is to enforce the law — not to make them,” Texas Attorney General Greg Abbott said, commenting on the filing. Abbott is the principal initiator of the lawsuit.

The reasons behind Obama’s decision to act without an approval from Congress are obvious as both legislative chambers are under Republican control since their electoral victory in early November, making the immigration reform nearly impossible to pass in the traditional procedure.

US House Republicans, Democrats Divided Over Obama’s Immigration Reform
During the past several days the Texas-led anti-Obama coalition added new members, including Arizona and Indiana. In the most recent development, the ‘courthouse Civil War‘ went full-scale, adding the renowned Dixie strongholds of Arkansas and Oklahoma, the economically struggling Michigan and the shale-booming North Dakota to the battle alongside the Lone Star State.

“What we’re suing for is actually the greater harm, and that is harm to the Constitution by empowering the president of the United States to enact legislation on his own without going through Congress,” Abbott said this past Sunday.

Shale Oil Boom May Become Next Bubble
Interestingly, out of the five states benefitting most from the shale oil boom, namely CO, ND, PA, TX and WV, three (ND, TX and WV) have joined the anti-immigration effort. These states should be more supportive of the Obama initiative as his policies have increased employment in these regions and could easily absorb newly arriving aliens. Texas is obviously irritated by the influx of border-crossing undocumented Hispanic teens, who are difficult to deport, and who had caused a near-humanitarian catastrophe situation this past summer along the Rio Grande  Thus, it is not economic concern like employment making people counter the immigration. It is a matter of values, indeed.

Republicans and their supporters, who claim they are defending the Constitution, say the actions like the Obama initiative could only be enacted by Congress. "We're going to fight this illegal amnesty and we're not going to stop," Sen. Jeff Sessions, R-AL told the International Business Times.

American Immigration Crisis
Abbott is even more radical in his expressions, saying that the Obama Immigration Reform "circumvents the will of the American people," which is not necessarily the case as pro-Obama urban communities are likely to benefit from the reform, as some 5 mln immigrants, currently unaccounted for, will effectively be forced to pay taxes. The Hispanic illegals gained notoriety in the rural areas as a possible menace due to their lifestyles and their unwillingness to assimilate, while the urban ‘melting pot’ effectively makes immigrants adjust and adapt as a necessary condition of survival. Sometimes the harsh urban environment pushes aliens into a diaspora, but eventually they assimilate.

According to a recent poll by Gallup, 51% of Americans disapprove of the Obama immigration reform, while 41% are supportive. The poll does not specify whether Americans disapprove of the idea of the immigration reform in general, or Obama’s alleged violation of procedure. Meanwhile, that same poll shows that only 30% non-Hispanic white people approve the action with 62% are against it. Of other demographic groups, 68% of non-Hispanic blacks favor the Obama initiative while only 24% are against it. The level of Hispanic support is even lower than that of the African Americans, with only 64% Hispanics favoring the Obama action and 28% being critical. A generalized group of US immigrants also approves the Obama action, with 69% in support and 23% opposing the bill.

The poll was conducted between November 24 and December 7 and confirms that at this point America is firmly standing true to its fundamental principle that it is a nation of immigrants where “all men are created equal, endowed by their Creator with certain unalienable Rights, among these are Life, Liberty and the pursuit of Happiness,” as stated in the Declaration of Independence.