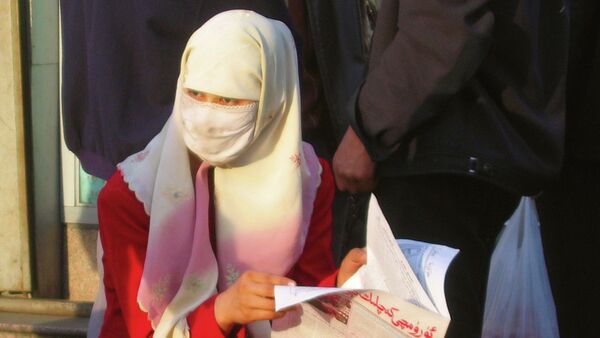 The authorities of Urimqi, the capital of China's Xinjiang Uyghur Autonomous region, have prohibited women from wearing burqas, a traditional Muslim garment, in public places amid a growing threat of radical Islamism in the region.

China's Court Sentences Eight to Death for Xinjiang Terrorist Acts
MOSCOW, December 11 (Sputnik), Ekaterina Blinova — The authorities of Urumqi, the capital of China's Xinjiang Uyghur Autonomous region, have banned the wearing of burqas in public places amid growing Islamic extremism in the region.

"The law in the predominantly Muslim region comes as Beijing intensifies a campaign against religious extremism that it blames for the violence that has left hundreds dead in the past 20 months," the Associated Press reported.

The new regulation was passed by Urumqi legislators on Wednesday, however, before coming into force the law should be approved at the regional level.

New Laws Passed to Combat Extremism, Separatism in China's Xinjiang
China has repeatedly launched campaigns aimed to discourage Uyghur women from wearing burqas, an Islamic veil that covers a woman’s face and body. Earlier this year young men with beards and women in burqas, hijabs, niqabs, burqas, or clothing with the Islamic star and crescent symbol were prohibited from using public transport in Karamay, a Xinjiang northern city. Another campaign dubbed "Beauty Project" in the city of Kashgar restricted the wearing of veils and masks.

Xinjiang authorities are trying to fight increasing Islamic extremism in the region by introducing laws banning traditional Muslim clothing. However, critics underscore that veils and beards cannot be considered an expression of extremism. They insist that the predominantly Muslim Uyghur minority has the right to exercise its religious beliefs, adding that the measures imposed on ordinary Uyghurs may trigger public anger and ignite further tensions in the region.

Hundreds have been killed in a string of terror actions in Xinjiang in the last 20 months. Islamist radicals had attacked governmental security forces as well as peaceful civilians in the region. The Chinese authorities have accused foreign-backed Muslim extremists, particularly the East Turkestan Islamic Movement (ETIM), a radical Islamist organization.