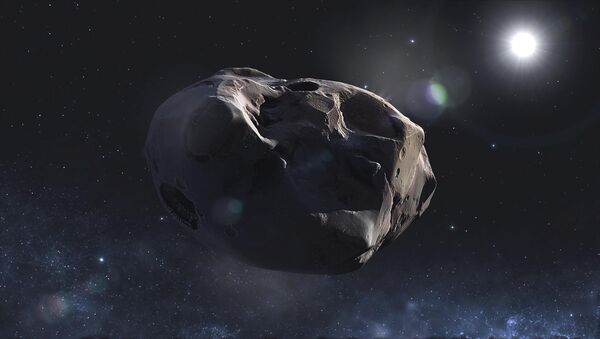 Findings from Europe’s Rosetta comet mission have indicated that most of the Earth’s water most likely came from asteroids. The results are out of line with a theory that comets brought water to the Earth, Deutsche Welle has said.

MOSCOW, December 11 (Sputnik) — On Wednesday, European scientists published a report concluding that water on the Earth iswas likely to have come from the rocky asteroids which hitstruck our planet 3.8 billion years ago, about a billion years after the Earth was created.

Touchdown! Rosetta Mission Philae Lands on Comet
Previously, scientists believed that comets, the most primitive objects in the solar system, which are rich in carbon, smashed into the Earth and brought elements that allowed life to exist.

The U-turn came after the end of the Rosetta spacecraft mission last month, when the European Space Agency’s Philae lander touched down on the 67P/Churyumov-Gerasimenko comet.

"We have to conclude that the terrestrial water was brought by asteroids more likely than comets,” Kathrin Altwegg of the University of Bern said, according to Deutsche Welle. Altwegg is principal investigator for the ROSINA mass spectrometer that has been examining the chemical fingerprint of water and other gases in the comet.

Published in the US journal Science, the report contains data gathered by the Rosetta mission which found water, but the wrong kind because it was too heavy.

After scientists measured the ratio between deuterium, a hydrogen isotope, and hydrogen, which forms water when combined with oxygen, it emerged that the comet has shown “probably the highest level of deuterium to hydrogen ratio, the most heavy of any of the solar system's bodies,” according to Altwegg.

Philae Lander Probe Finds Organic Molecules on Comet: German Space Agency
She argued that  this “probably means that it was formed at very low temperatures and that it could be  most probably the original material from the very, very early time of our solar system, so it's a real treasure chest to explore how our solar system looks like 4.6 billion years ago.”

“On the other hand, water in asteroids has a lower deuterium/hydrogen ratio and is more similar to water on Earth,” Altwegg added.

She also said that “there was a lot of impact in the early times, and it’s very likely that some of the terrestrial water was brought at that time and so the only water that’s remaining is actually from asteroids or asteroid-like bodies from the inner Solar System.”

Meanwhile, scientists are poised and ready to continue the discussion. With asteroids now thought to be main carriers of water to the Earth, it may be that the Earth kept some of its original water in ice, or in its crust, at the poles, some researchers insist.