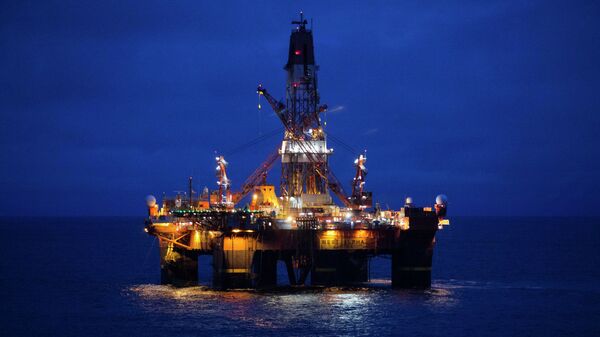 Beginning in 2015, Russia's Rosneft will deliver 10 million tons of oil annually for a period of 10 years to India. Oil will be transported by sea from Russia's Far East, as well as the Black and Baltic seas.

“The contract foresees deliveries to begin already in 2015 of 10 million tons of oil per year for a period of 10 years with the possibility of prolongation,” Sechin told journalists in India’s capital of New Delhi.

The contract was signed between Russia’s Rosneft and India’s largest oil manufacturing company Essar on the sidelines of Russian President Vladimir Putin's visit to India.

Sechin said oil would be delivered by sea from different Russian regions, including from the Far East, as well as the Black and Baltic seas.

Putin Arrives in India to Sign Energy, Military Deals, Discuss Cooperation
During Putin's visit the two countries are expected to sign up to 20 agreements relating to energy, trade and defense. Putin's visit is projected to give an impetus to relations between Moscow and New Delhi amid decreasing trade and slowing economic growth in Russia.

India is the world’s third largest oil buyer, with annual imports of some 170 million metric tons. The bulk of these oil supplies currently come from Iran, Saudi Arabia and Nigeria. India’s minister of state for petroleum and natural gas said in October that oil import diversification in the form of purchases from South America and Russia will lower geopolitical risk.

Privatization of Rosneft Not to Occur in 2014, Issue Remains Open for 2015
Both domestic and foreign investors in the privatization of 19.5 percent of Russia’s state-owned oil giant Rosneft are being examined, Igor Sechin announced.

“Potential investors are being compiled. I think there will be several groups of investors, both domestic and foreign investors,” Sechin told journalists in India’s capital of New Delhi.

“We won’t take into consideration the market volatility [during privatization], only the fundamental value of the company [will be considered],” Sechin added.

State shares of 19.5 percent are to be privatized by 2016 according to a government program and could be accomplished in several steps. The shares are to be sold to private investors at a price no lower than the company’s 2006 IPO of an estimated $10.7 billion.

Russia
Russian Government Approves Privatization of 19.5% of Rosneft Shares
Rosneft's IPO in July 2006 stood at $7.55 per share. On December 11, the price of one share stood at $3.8, due to the current weakness of the ruble.

According to Sechin, it is too early to talk about the methods of privatization, as the technical process is currently being carried out.