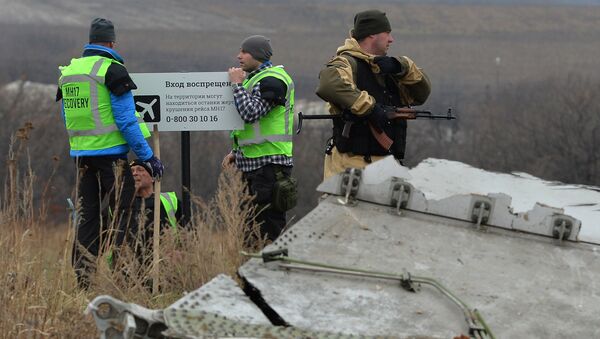 "Australia feels a strong bond with Ukraine arising from the MH17 atrocity & I thank @poroshenko for his support," Abbott wrote on his Twitter account.

Australia feels a strong bond with Ukraine arising from the MH17 atrocity & I thank @poroshenko for his support. pic.twitter.com/0oyPHMSQvR

Thirty-eight Australian citizens died in the crash of Malaysia Airlines flight MH17 near the city of Donetsk, on July 17, 2014. The plane was flying from Amsterdam to Kuala Lumpur. All 298 people aboard were killed. A preliminary report said the plane most likely broke up in mid-air after a large number of high-energy objects penetrated the fuselage.

US, Japan, Australia Call for Just Investigation of MH17 Crash: White House
The Australian prime minister made the statement amid an ongoing state visit by Poroshenko to Australia, which will continue until December 13.

According to a release issued on Thursday by the Ukrainian president's press service, a number of agreements have been made between the two countries. Specifically, Australia will provide $100 million to the economically-troubled Ukraine as part of the IMF (International Monetary Fund) assistance, and over $2 million to the Ukrainian armed forces.

Abbott and Poroshenko also agreed to energy technology cooperation and discussed the possible use of Australian uranium for nuclear energy plants in Ukraine.