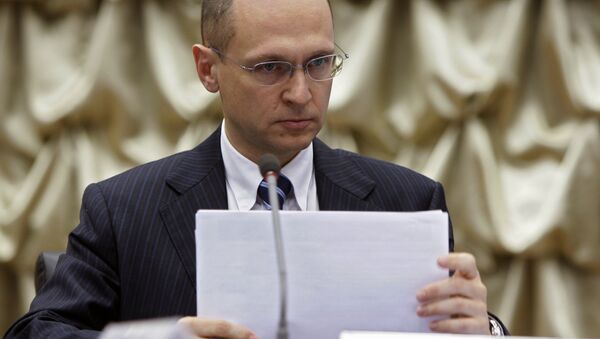 Russia and India signed an agreement on the construction of 12 new nuclear energy blocks over the next two decades.

NEW DELHI, December 11 (Sputnik) – Russia and India have agreed on the construction of at least 12 new nuclear energy blocks within the next 20 years to include two new blocks for the existing Kudankulam Nuclear Power Plant in India’s southern tip in 2016, Russia’s Rosatom head Sergei Kiriyenko said Thursday.

Putin: Russia Waiting for India to Choose Site of New NPP, Can Build More
"This morning a general framework agreement was signed on the construction and equipment delivery for the third and fourth blocks of the Kudankulam Nuclear Power Plant at the present site. Cement foundations [for the new blocks] will be poured in the beginning of 2016," Kiriyenko said.

India and Russia also agreed on a long-term project to build at least 12 more energy blocks over the next two decades.

“Today we will sign a strategic document that foresees the construction of no less than 12 energy blocks over the next 20 years, or in other words this would be no less than two nuclear energy facilities,” Kiriyenko added.

He noted that the document will be signed later on Thursday in the framework of Russian President Vladimir Putin's visit to India.

None of Rosatom’s International Contracts Affected by Sanctions: CEO
The Rosatom head also stated that a confidential information exchange agreement on cooperation between Russia and India in nuclear energy sciences will be signed.

Kirienko stressed the strategic character of cooperation between Russia and India.

"We cooperate in research reactors, a new generation of reactors, including the use of thorium as a fuel; we consider the possibility of cooperation in uranium extraction, its enrichment. Today we can say that the cooperation between Russia and India has an absolutely strategic character," Kiriyenko noted.

The Rosatom head added that the two sides also discussed the possibility of working together in other countries.