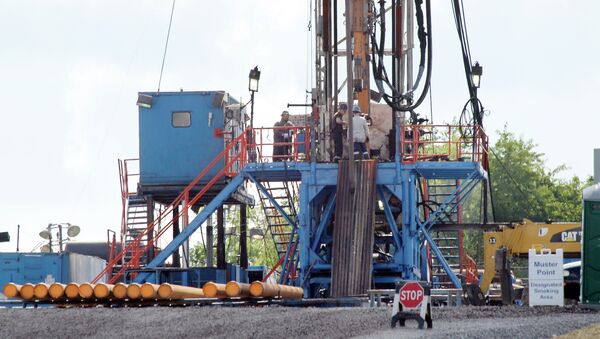 The US Fed needs to tighten monetary conditions amid the recent slump in oil prices; otherwise the shale oil boom might suddenly turn into a bubble, overheated by ultra-affordable credit.

The Oil Price Fall – Who Stands to Lose?
MOSCOW, December 11 (Sputnik)- The recently skyrocketing volumes of US oil production, known as the shale boom, currently pushing rates of employment up and contributing realty to the accelerated growth, may prove dangerous for the economy amid the US Fed's ultra-easy monetary policy.

The Federal Reserve is currently doing little to prevent the blooming sector of the national economy from turning into a bubble. The interest rate is dangerously low, possibly fueling the 'shale bubble', similar to the dotcom bubble and real estate bubble, both of which maimed the economy at their time.

The oil boom of the last couple years in the United States has happened due to two main reasons: a technological breakthrough and cheap credit. While the former is undoubtedly a global-scale scientific achievement, bearing benefits to humanity, the latter was possible due to the Fed's ultra-low interest rate, which provided large volumes of cheap money. However, the Fed has gradually been tightening up since October last year, possibly preventing the economy from overheating.

Nonetheless, as the QE ended this autumn, Fed monetary tightening halted, with the shale boom continuing, bringing the US oil production to its record high since 1983 and driving oil prices to their lowest since 2009. In these circumstances, the Fed’s protraction in further tightening, namely the interest hike, may transform the shale boom into a 'shale bubble'.

Brent Oil Prices Trade at Five-Year Low Amid Oversupply
At this point, several alarming signals have come from the financial markets. The total value of junk bonds in energy companies has reached $210 bln, roughly 16% of the $1.3 trln junk bond market, according to the Financial Times.

This figure is four times the share of 4% in energy junk bonds ten years ago. This also means that more investors get little to no returns from the energy market as oil prices slump below $70, as many junk bond issuers now do not have enough revenue to pay high, if any, yields.

The situation is caused by the recent excessive enthusiasm towards shale oil in the US, as in the first half of this year US production rose amid the still-high oil prices, allowing a massive influx of private money in the business. Bloomberg wrote this May about several millennials, aged 25 to 30, becoming millionaires in a very short time, having purchased tiny stakes in shale enterprises meaning there is a huge share of speculative capital in the shale oil business.

This is a risky situation, and only tighter monetary conditions will prevent negative tendencies from prevailing, causing a bubble burst.
The oil prices are heading for their multi-year lowest of $43/bbl, according to recent Morgan Stanley estimates, and major player are already preparing for a major sell-off in smaller and overly-indebted oil producers, who will be the first victims of the US-Saudi price war. However, the Wall Street Journal is optimistic, saying that the enthusiasm for shale oil is still so high that even after being sold, most energy stocks are bought immediately, delaying a possible bubble burst.

OPEC versus US shale
However, the financial market adjustments to lower oil prices are inevitable, commentators say.

"There's a fair amount of companies that can't survive under their leverage with lower oil prices," Aaron Dunn of Eaton Vance Corp. told the WSJ.

Moody's Investors Service being pessimistic, affected by lower oil prices, has downgraded the prospects of oil and gas bond issuers to 'negative' on November 25.

All in all, the shale oil fever needs to be cooled down by the Fed's decisive measures, which is a raise in the interest rate. There are several additional risks potentially developing into a major menace to the economy: most new jobs created recently are concentrated in the five shale-producing states (CO, ND, PA, TX, WV), the economic activity might be slowing in the shale segment due to falling prices and the consequently lower attractiveness of this business, the average market-defined  breakeven price for the shale oil is still unknown as all estimations are only preliminary, meaning that it is still impossible to predict the scale of losses in case of a sudden contraction in the shale oil production.

Shale oil production must be watched thoroughly, as while the global oil price is on a downward trend, this is the riskiest part in market stabilization, which might be anticipated by the end of the first quarter 2015.