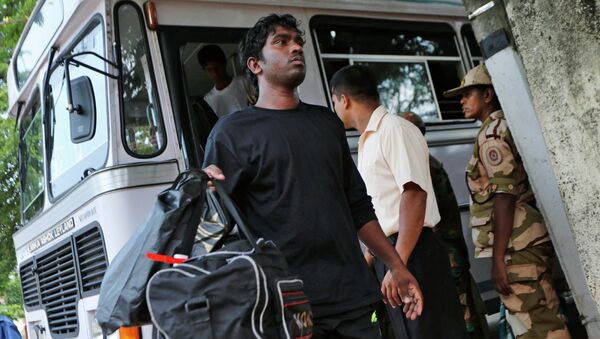 © AP Photo / Eranga Jayawardena
Subscribe
On November 29, Australian authorities turned a boat carrying 37 asylum seekers over to Sri Lankan authorities without carrying out a thorough screening of the passengers.

On November 29, Australian authorities turned a boat carrying 37 asylum seekers over to Sri Lankan authorities without carrying out a thorough screening of the passengers.

"Australia's actions in the Indian Ocean show the yawning gap between its practices and international legal principles," Elaine Pearson, the head of the HRW's Australian division, said, adding that Australia should not ignore "politically motivated torture, rape and ill-treatment of many men and women detained by Sri Lankan security forces."

Australia to Consider Tightening Asylum Laws Despite UN Concerns
Graham Thom, refugee coordinator at Amnesty International Australia, stated that this case highlighted the failure of the Australian refugee screening system, characterizing it as having "flawed procedures" and offering "minimal opportunity for highlighting abuse."

Australian officials handed the asylum seekers over directly to the Sri Lankan navy after only cursory screening at sea. Only one of those on board was deemed to be a legitimate asylum seeker. The three human rights organizations criticized the procedure for assessing the plausibility of the passengers' asylum claims, pointing to the lack of recovery time and access to lawyers.

Afghanistan, Sri Lanka, Iraq and Iran are the countries of origin of the majority of asylum seekers who apply for asylum to Australia. Australia's policy on asylum seekers provides for applications to be processed in detention centers in Papua New Guinea or Nauru. Human rights organizations have repeatedly raised concerns over conditions oversees detention centers.