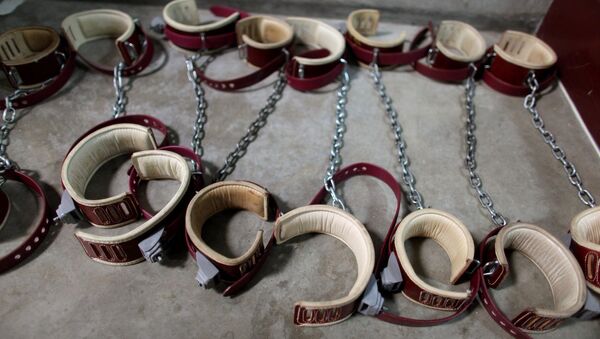 On December 10, 2014, the international community commemorates the 30th anniversary of the adoption of the Convention against Torture by the United Nations.

MOSCOW, December 10 (Sputnik) — The Convention against Torture and Other Cruel, Inhuman or Degrading Treatment or Punishment was adopted on December 10, 1984 and entered into force on June 26, 1986.

CIA Torture Report: Top 10 Enhanced Interrogation Techniques
The convention consists of 33 articles and is aimed at bolstering efforts against torture and other cruel, inhuman or degrading forms of treatment or punishment worldwide.

According to the document, "torture means any act by which severe pain or suffering, whether physical or mental, is intentionally inflicted on a person for such purposes as obtaining from him or a third person information or a confession, punishing him for an act he or a third person has committed or is suspected of having committed, or intimidating or coercing him or a third person, or for any reason based on discrimination of any kind, when such pain or suffering is inflicted by or at the instigation of or with the consent or acquiescence of a public official or other person acting in an official capacity."

The convention requires states to take legislative, administrative, judicial or other measures to prevent acts of torture in any territory under its jurisdiction.

The document also says that under "no exceptional circumstances whatsoever" may torture, including war, threat of war, internal political instability or any other public emergency be justified.

Torture cannot be justified as a means to protect public safety or prevent emergencies. Neither can it be justified by orders from superior officers or public officials, the convention states.

The document prohibits parties from returning, extraditing or returning any person to a state "where there are substantial grounds for believing that he would be in danger of being subjected to torture."

"Each State Party shall ensure in its legal system that the victim of an act of torture obtains redress and has an enforceable right to fair and adequate compensation including the means for as full rehabilitation as possible. In the event of the death of the victim as a result of an act of torture, his dependents shall be entitled to compensation," the convention specifies.

States that are parties to the convention have agreed to "afford one another the greatest measure of assistance" in connection with civil proceedings brought in respect to acts of torture.

They should "ensure that education and information regarding the prohibition against torture are fully included in the training of law enforcement personnel, civil or military, medical personnel, public officials and other persons who may be involved in the custody, interrogation or treatment of any individual subjected to any form of arrest, detention or imprisonment."

US Justice Department Refuses to Resume Torture Investigation
Article 17 of the convention grants the Committee against Torture, established in 1987, powers to monitor the compliance of the document. The committee consists of "10 experts of high moral standing and recognized competence in the field of human rights, who shall serve in their personal capacity."

The convention specifies: "The States Parties shall submit to the Committee, through the Secretary-General of the United Nations, reports on the measures they have taken to give effect to their undertakings under this Convention, within one year after the entry into force of this Convention for the State Party concerned. Thereafter the States Parties shall submit supplementary reports every four years on any new measures taken, and such other reports as the Committee may request."

Each report has to be considered by the committee which may make comments or suggestions on the report as it considers appropriate and must forward them to the state party concerned.

Apart from reports, the convention has established three other mechanisms by which the committee exercises its monitoring function: under certain circumstances the committee reviews complaints or communications from individuals who claim to be victims of a violation by a state party of the provisions of the convention; the committee conducts inquiries and reviews interstate complaints.

The Optional Protocol to the Convention that went into effect in June 2006 established the Subcommittee on Prevention of Torture. It requires that the participating states should set up an independent mechanism authorized to inspect detention sites to prevent state-sanctioned torture.

At present, 156 countries have signed on to the convention. The Soviet Union ratified it on March 3, 1987.

As the USSR's successor, the Russian Federation exercises the rights and fulfils the convention's obligations.