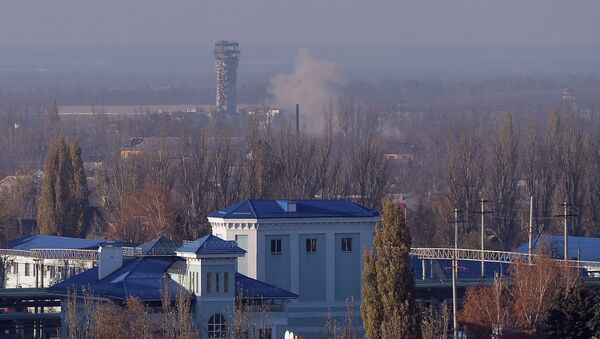 Kiev hopes that hostilities will be ceased during the "silence regime" in eastern Ukrianian regions, Ukraine's National Security and Defense Council spokesman said.

“Insofar as this regime was supported and that we have seen a surmountable decrease in the number of shelling, we are continuing to support the silence regime. There is hope that shelling will decrease and will be brought to zero,” Lysenko said during a briefing in Kiev.

Last week, Ukrainian President Petro Poroshenko announced the introduction of "silence regime" in the southeast of the country beginning December 9 in a bid to renew ceasefire efforts.

Lavrov: Ceasefire Creates Hope for Heavy Arms Pullout in Ukraine
On Monday, the Ukrainian Defense Minister Stepan Poltorak said the government in Kiev was set to observe the ceasefire in southeastern Ukraine.

In a separate move, the Ukrainian government declared Tuesday a "day of silence" to allow the withdrawal of heavy arms and artillery from the southeast.

The previous ceasefire agreement between independence supporters and Ukrainian security forces was reached on September 5 in Minsk through the mediation of the Organization for Security and Co-operation in Europe (OSCE) and Russia.

Both sides have subsequently accused each other of repeatedly breaking the truce.