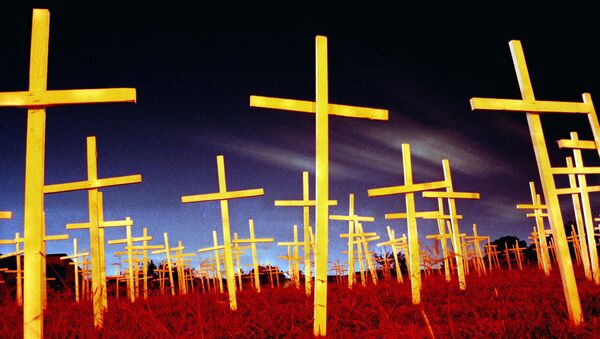 © Flickr / Terry Shuck
Subscribe
The House of Representatives in Michigan has passed a bill that Republicans say would make it easier for people to defend their freedom of religious expression. But Democrats argue the bill would open the door to legal havoc.

Lawmakers in Michigan’s Republican-led House have approved what is being called the Religious Freedom Restoration Act (RFRA). Supporters of the legislation say the Act is intended to limit laws that could infringe on an individual’s religious freedom.

But those who oppose the legislation say it’s really a “license to discriminate,” because it opens the door to subjecting state laws and local ordinances to legal challenge.

“I have been horrified as some have claimed that a person’s faith should only be practiced while hiding in their home or in their church,” conjuring visions of religious repression.

The ACLU is not a fan of the bill either.

An attorney for the group said the RFRA could permit a landlord to sue the city government if he is forced to rent an apartment to a single mother.

RFRAs in other states have been used as a defense by pharmacists who refuse to dispense birth control medication because such an action goes contrary to their religious beliefs.

“I should not be forced to follow the religion of my pharmacist,” said Democratic state Representative Vicki Barnett.

The RFRA in Michigan is modeled after a federal version of similar legislation that was signed into law in 1993 by President Bill Clinton. However, the Supreme Court later ruled that the act does not apply to individual states. Under Michigan’s RFRA, if an individual wanted to take the government to court over a law that they perceived was an affront to their religious freedom, they would have to prove it in court. The government could then hope to prove it had a compelling interest for enacting the law.

Free To Be LGBT?

The passage of the RFRA comes on the heels of an intense debate in the Michigan House over LGBT rights. A proposed bill to include LGBT people in the state’s anti-discrimination laws ran into the buffers because rights for transgender residents were excluded at the insistence of Republicans.

“If you’re going to act in the public space, you must act in a way that is fair and equal to all citizens regardless of skin color, national origin, religion and hopefully sexual orientation and gender expression,” said Democrat state Representative Jeff Irwin.

The bill now heads to Michigan’s senate for consideration.