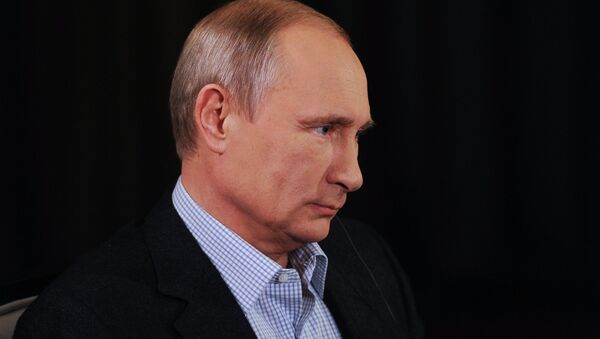 © Sputnik / Mikhail Klementyev
/
Go to the photo bank
Subscribe
Putin stressed that Russia had to diversify the geography of its energy supplies as the European consumption was increasing too slowly, while political, regulatory and transit risks in the West were on the rise.

Energy Cooperation to Top Agenda of India-Russia Summit: Russian Ambassador
MOSCOW, December 9 (Sputnik) — Russia wants to become a reliable energy supplier to the Asian markets in order to diversify the destinations of its energy deliveries, President Vladimir Putin said in an interview with the Indian Information Agency PTI.

"We expect to secure ourselves a role of a reliable energy supplier to the Asian markets," Putin said prior to his official visit to India on December 11 for the 15th annual India-Russia Summit.

Putin stressed that Russia had to diversify the geography of its energy supplies as the European consumption was increasing too slowly, while political, regulatory and transit risks in the West were on the rise.

"At the same time, we intend to boost economic growth in Russia’s Eastern Siberia and Far East regions and build new infrastructure there," the Russian president added.

Asia has been one of most lucrative destinations for Russian oil and gas supplies, following Moscow’s agreement in Beijing to provide China with 30 billion cubic meters of gas over a span of 30 years.

In November, Russian and Chinese energy majors Gazprom and CNPC signed a package of 17 documents, including a framework deal to deliver gas to China via the western route pipeline. Gazprom CEO Alexei Miller commented on the deal saying the volume of supplied LNG to China could “exceed European exports in the mid-term perspective”.

India will start receiving shipments of liquefied natural gas from Russia under a 2012 contract as early as in 2017, Russian President Vladimir Putin said in an interview with the Indian Information Agency PTI.

Singapore Companies Interested in Cooperation With Russia in LNG Projects
A long-term agreement on LNG supplies signed between the Gazprom Group and India's GAIL in 2012 entered into force in June 2014. It provides for the delivery of 2.5 million tons a year for the period of 20 years.

"India will start receiving LNG shipments as early as in 2017, or, in case the deadlines are shifted, by all means no later than in 2021," Putin said prior to his official visit to India on December 11.

In 2012, the Russian energy giant's subsidiary Gazprom Marketing & Trading Singapore signed a legally binding 20-year LNG sales and purchase agreement with GAIL, following the signing of a Basic Framework Agreement by the two companies in May 2011.

Under the contract, GAIL will annually receive 2.5 million tons of LNG over a period of 20 years. The price for LNG supplies will be based on a formula tied to the price of oil in terminals in India.

Gazprom described India as one of its key LNG markets, in addition to Asian countries, stressing it was looking forward to working together with GAIL to help India meet its increasing energy demand whilst securing a long-term market for Russian gas. India is the fourth biggest energy consumer after China, the United States and Russia.