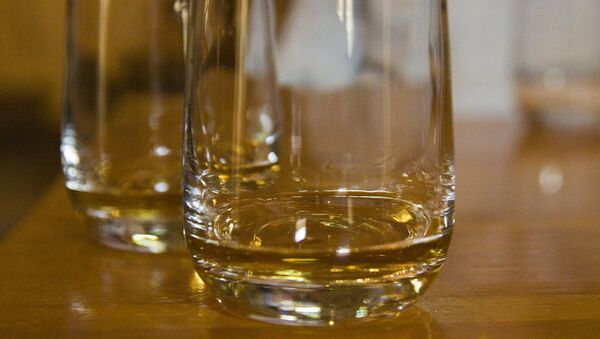 © Flickr / unukorno
Subscribe
US military officials have lifted the drinking ban, allowing American servicemen to drink alcohol off base during off-duty hours in Okinawa, Japan. Citing numerous incidents involving drunk US soldiers, Okinawa residents seem to be displeased by the decision.

Okinawa Elections Might Jeopardize US-Japan Relations
MOSCOW, December 9 (Sputnik), Ekaterina Blinova — US military authorities have lifted an off base drinking ban for their servicemen in Okinawa, Japan; while the Okinawa Mayor has asked the US Marine Corps' Camp Foster officials to postpone the ruling, citing numerous incidents involving drunk US military.

The Japan Times underscores that the new ruling still prohibits the US military personnel from consuming alcohol from midnight to 5 a.m.

It is worth mentioning that the US military authorities had restricted off-base nighttime movements for the service members after two American soldiers raped a Japanese woman in Okinawa Prefecture in October 2012. However, in February 2013, high-ranking officers were allowed to leave the base at nighttime, but were still banned from drinking alcohol. Currently, US military personnel are officially permitted to drink up to two bottles of beer at off-base bars between 6 pm and 10 pm. Unfortunately the ban has not prevented US soldiers from committing crimes linked to drinking.

Okinawa Residents Elect Governor Opposed to US Base
"Just last Saturday, two US servicemen were arrested on suspicion of drunk driving, and two days before that a US Marine Corps serviceman was suspected of being involved in a hit-and-run accident in Okinawa City," the Japan Times reports.

Although the US military authorities claim they "will continue our utmost efforts to prevent incidents and accidents," the Okinawa residents are likely to protest against the ban easing, notes the Japanese media source.

On Monday, December 9, Okinawa Mayor Sachio Kuwae met with the US Marine Corps' Camp Forster officials and asked to postpone the decision to ease the ban, referring to ongoing incidents involving drunk US military servicemen.