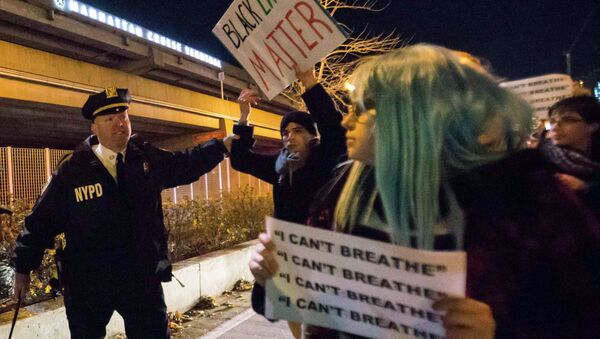 Several NBA stars put on t-shirts saying "I can't breathe" in solidarity with people protesting after a grand jury decided not to press charges against police officers who killed an unarmed black man earlier this year.

More than 1,000 Protest in Berkley Third Night in Row
MOSCOW, December 4 (Sputnik) – Several NBA stars, including Cleveland Cavaliers forward LeBron James, put on t-shirts saying "I can't breathe" as an expression of support for people protesting against police brutality and unfair sentencing in the wake of a grand jury’s decision not to indict a white police officer in a death of an black man Eric Garner, the Guardian reports.

"Obviously as a society we have to do better, we have to have empathy better for one another no matter what race you are, but it’s more a shout-out to the family more than anything,” James said, as quoted by the Guardian.

Berkeley Protests Move to Oakland: Tear Gas Fired, Injuries Reported
LeBron James, Kyrie Irving, Jarrett Jack and Kevin Garnett put the t-shirts on during warm-ups before Monday night’s game between the Cleveland Cavaliers and the Nets, as protests in New York and across the US continued for the sixth day.

The Washington Post called James’ gesture "a big deal", pointing out that he is one of the most famous athletes in the world. He is also "the corporate face of a few brands, and he is at the height of his career. And, oh yeah, Prince William and his wife, Kate, were at the game," the newspaper pointed out.

Activists in NYC Vow More Protests Over Ruling on Eric Garner's Death
Eric Garner, who was asthmatic, died from suffocation in July after being put in a chokehold by police officer Daniel Pantaleo. A bystander recorded a video of the police arresting Garner, who sold untaxed cigarettes, and of Pantaleo later choking the man to death, as Garner cried out "I can't breathe, I can't breathe." The phrase "I can’t breathe", along with "Hands up, don’t shoot" and "Black lives matter" has become one of the rallying cries for protesters.

The New York grand jury decision follows another similar case in Ferguson, Missouri, where black teenager Michael Brown was killed by a white police officer in August. The killing and a similar verdict by a grand jury not to indict officer Darren Wilson set off nationwide protests and renewed debates over police brutality and unfair sentencing.