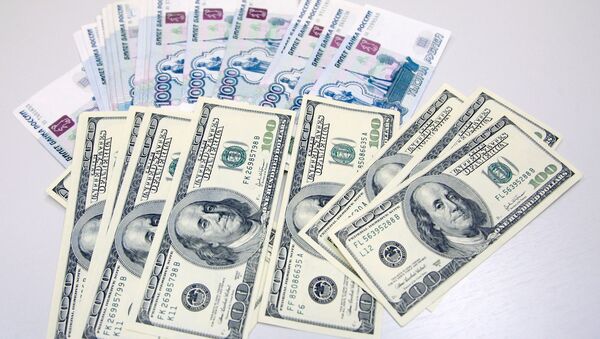 Russia’s ruble has plunged this year due to the combination of domestic and international factors, severely battering the nation’s economy.

MOSCOW, December 9 (Sputnik) – The dramatic plummet of Russia’s national currency, the ruble, during the past two month amid international sanctions and a significant drop in oil prices has put pressure on the nation’s export-dependent economy. There is no sign of stabilization in the ruble’s FX rate and its decline is largely expected to continue.

Russia’s ruble (RUB) has been the worst performer among the 24 developing nations’ currencies in the global market this year, as evidenced by the Bloomberg data. The ruble depreciated 39% since the beginning of this year,  25% of which has happened during the last two months.

Russia to Revise Down Ruble’s Yearly Average Exchange Rate for 2015
There are several reasons behind the ruble’s fall, some of which reflect global economic trends, while others are the direct consequences of either Russia’s foreign politics, or shortcomings in the nation’s commodities-reliant economy, or the abundance of ruble-denominated liquidity in Russia’s domestic finance, combined with its insufficient presence globally.

Trouble for the emerging markets’ currencies has been brewing since last October, when the US Federal Reserve announced it would trim its bond-buying program, which inevitably led to the strengthening of the dollar against other currencies. The first effects of the Fed trim hit the ruble in January, when the RUB to USD FX rate slid from 32.8550 to 35.1537, or roughly 6% as the dollar-denominated liquidity had become more expensive due to the Fed monetary tightening, pushing up the borrowing costs internationally.

Collapse in Oil Prices Cause Record Ruble Fall
The ruble had been moving flat for a while, as the positive effects of Sochi Winter Olympics for Russia’s international prestige were appealing the international investors. However, as the international community has become increasingly concerned with Russia’s alleged involvement in the Ukrainian crisis, the situation has become complicated. The international sanctions against several Russian and Ukrainian citizens and enterprises did not seem to affect Russia’s economy until July 17, when the US limited the issue of dollar-denominated loans to Russia’s major businesses, including the state-controlled oil giant Rosneft, and one of the biggest banks, VEB. On 1 July, the RUB to USD FX rate was 34.3284, on 17 July in rose to 35.1343 as compared to the previous day’s 34.4148, hitting the high of 36.0396 on 5 August, heading for its new record high of 37.2897. The ruble has yet not rebounded ever since.

However, the initial effects of the limitation imposed on Russia’s borrowing of the dollar-denominated liquidity were limited, as 90-day loans were still allowed. The situation got worse for the ruble’s FX rate on 12 September, when the US pushed through the new sanctions, limiting the maturity of dollar-denominated loans to Russia to 30 days. The ruble plunged soon thereafter: on 12 September one US dollar bought 37.7520 rubles, on 1 October it bought 39.6897 rubles, on 1 November the RUB-USD FX rate was 43.7100.

Brent Oil Prices Trade at Five-Year Low Amid Oversupply
The recent decline in global oil prices have only exacerbated Russia’s financial situation, as oil exports generate roughly 67% of the nation’s income in hard currencies. Global oil prices reached their highest this year in late June, hitting $102.53/bbl in the US, declining sharply thereafter, according to the Marketwatch data.  Oil prices were driven down by the abundance of supply and lack of demand, caused in part by US exports, allowed by the Obama administration in mid-June, as reported by the Wall Street Journal. Mainland China’s slowdown also has played a significant role in dragging oil prices down as China’s economy is the world’s biggest oil importer. Oil prices have slumped 39% since late June, effectively undermining the ruble’s ability to resist domestic downward pressure caused by the lack of dollars in Russia’s economy. According to Morgan Stanley estimates, oil prices are heading for the price of $43/bbl in 2015, as reported by CBC Canada. This means that the ruble is most likely to further weaken against other major currencies next year.

In an unsuccessful attempt to help the ruble, Russia’s Central Bank (CBR) took an important measure to boost the market’s confidence in the national currency by letting the ruble float free and limited ruble-denominated liquidity into the economy on 10 November. As a consequence, in mid-to-late November the ruble strengthened for a while, from 47.3110 for $1 on 14 November to 44.8364 for $1 on 24 November, but only to see its later plummet to record lows of 54.4554 on 4 December.

Russian Bank System Stable Despite Change in Ruble Exchange Rate: Official
The inflation rate in Russia was driven up this year not only by the ruble’s struggle, but also by the Russia’s government’s measures, aimed at limiting foods imports from the EU in response to the international sanctions over Ukraine. Monthly inflation in Russia accelerated as the ruble started its fall in July together with the oil prices. From 7.5% in July, the inflation rose to 7.6% the next month, reaching 8% in September, 8.3% in October and 9.1% in November, according to the data by Trading Economics. The main driver behind this year’s boost in prices were foods and imported consumer and manufactured goods. The CBR evaluates the impact of the ruble’s plunge on the yearly inflation as being 2.5%. Next years’ inflation will exceed 10%, according to the experts’ estimates, however, the official figures are still below the 10% threshold.

However, the devaluation of the ruble has had some positive effect in Russia. The nation’s budget is accounted in rubles, meaning in the lack of the dollar-denominated income a cheaper ruble allows keeping the budget’s income and spending roughly unchanged. Adding to the fiscal targets, the positive  effects of a cheaper ruble have redounded upon Russia’s exporters, rendering them more competitive in the global surrounding.

Nevertheless, Russia’s economy is suffering amid the shrinking consumer demand, stalling growth and faltering finance. In case no positive development is achieved in the Ukrainian crisis, possibly easing or lifting the international sanctions, the nation’s economy may shrink quicker than anticipated at this point. Another hope would be a rebound in oil prices, but such development is considered nearly impossible in the short-to-mid-term.