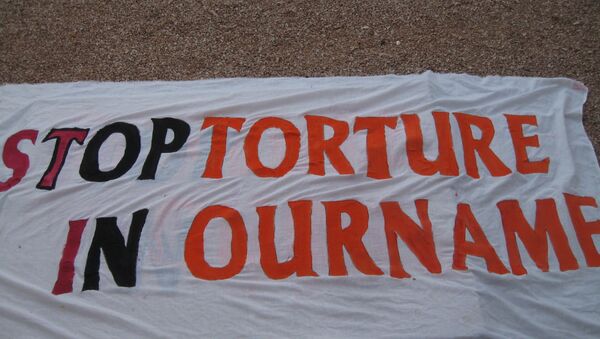 As the CIA torture report is scheduled for release, US mobilizes response teams of up to 2,000 in various locations around the globe to prevent potential violence.

MOSCOW, December 9 (Sputnik) — The CIA torture report scheduled for release Tuesday has prompted US embassies, military posts and personnel across the world to prepare for possible attacks, while protests against police brutality currently rage inside the country, according to numerous media reports.

Guantanamo Prisoners Better Off in Gitmo Than in US Prisons: Lawyer
The State Department warned its employees overseas of potentially violent backlash in anticipation of the long-delayed release of the Senate Intelligence Committee report, triggered by senior intelligence officials' classified assessments, NBC News reported Tuesday.

CNN has identified contingency response teams totaling up to 2,000 marines mobilized in Italy, Middle East and on patrol in the Arabian Sea. An additional three teams of 50 marines in Spain, Bahrain and Japan trained to protect vulnerable US embassies are also on alert, a US defense official was cited by the network as saying.

OUTCRY WILL CAUSE 'VIOLENCE AND DEATHS'

The White House underscored concerns over potential blowback Monday, with Press Secretary Josh Earnest reiterating at a press briefing that the government has taken "prudent steps to ensure that the proper security precautions are in place at US facilities around the globe."

House Intel Chairman Warns Senate CIA Torture Report May Cause Violence
Despite Earnest's claims that the administration fully backs the release of the declassified torture report, Bloomberg revealed the appearance of "competing forces" in the administration on Friday. In a phone conversation with the report's author that morning, Secretary of State John Kerry attempted to delay the release date, citing inconvenient timing.

According to the Telegraph and the Guardian, the 480-page report concludes that the CIA misled Congress about the use of torture "to cover its tracks" and hide the fact that it "did not yield useful intelligence." Tactics included mock-drowning, sleep deprivation, stress positions, as well as sensory and dietary manipulation of suspected Al Qaeda operatives held at CIA "black sites" around the world.

UN Torture Watchdog Slams US For Police Brutality in Ferguson
Former President George W. Bush, whose intelligence team oversaw the implementation of torture practices in an anti-terror campaign after the September 11, 2001 attacks, told CNN on Sunday that he would not distance himself from the "good people" of the CIA.

The executive summary of the still-classified 6,200-page report is expected to be released Tuesday and will reportedly contain graphic accounts of the CIA's "enhanced interrogation techniques," which US President Barack Obama labeled as "torture" in August 2009.

The US Senate Select Committee on Intelligence spent four years investigating the CIA's interrogation practices, including waterboarding and sleep deprivation. The so-called torture report was approved for release in April, but has not been immediately published due to the agency's demands to delete sensitive material from the final version.

Against the backdrop of torture overseas, an 18-month-long federal investigation into police brutality revealed last week that local authorities use "excessive force" on a regular basis. The finding announced by US Attorney General Eric Holder coincided with violent protests over a series of incidents involving the killing of unarmed black youths by white police officers that have gone unpunished.

Over the past few weeks, two separate grand juries decided against indicting the police officers involved in the shooting deaths of 43-year-old Eric Garner and 18-year-old Michael Brown, both unarmed, over the summer. The non-indictments, coupled with the fatal shooting of a 12-year-old black boy in Cleveland, Ohio, by a white officer has fueled anger among thousands across the United States who have protested in the streets, shutting down highways, staging die-ins and, as a rallying cry, chanting Eric Garner's last words, "I can't breathe."