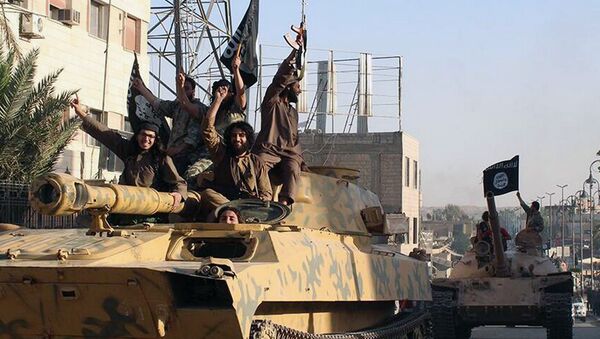 The Islamic State has executed a man accused of blasphemy in front of a crowd, including children, in the Syrian province of Raqqa.

Indian Islamic State Recruit Confesses Suicide Bombing Attempts in Syria
The man was executed in Sulouk, a town located in the Syrian province of Raqqa, on Monday. A crowd of people, including children, watched the event, according to Syrian Observatory for Human Rights, a UK-based NGO monitoring situation in Syria.

A jihadist website confirmed the information, adding that the man pled guilty to charges, according to Reuters. It also posted several photographs from the execution. One of them showed a man dressed in black holding a sword above a blindfolded and kneeling person, the news agency stated.

Islamic State Attacks Government Airbase in Eastern Syria
The Islamic State has carried out numerous executions in the territory under its control. In June 2014, the group established a caliphate governed by a strict version of Sharia law. Those found guilty of blasphemy, adultery or stealing are sentenced to death.

In November, the Syrian Observatory for Human Rights stated that over 1,400 people had been executed in Syria since June. The bodies of people killed for violating Islamic law are often left in public places.

Currently, a US-led international coalition of over 60 states is carrying out airstrikes against IS targets both on Iraqi and Syrian territory in order to destroy the group.