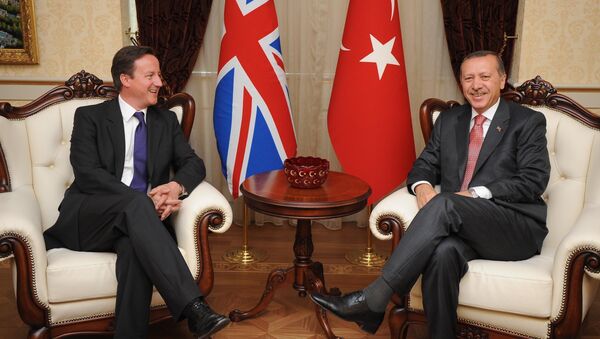 British Prime Minister David Cameron is meeting his Turkish counterpart Recep Tayyip Erdogan in Ankara in a bid to resolve differences between the two nations over how best to tackle the growing threat posed by ISIL militants in Iraq and Syria.

The current instability in Syria and Iraq, regional security issues in general and the emergence of ISIL are all likely to feature in discussions. But it’s questions like ‘how to stop British jihadists crossing the Turkish border into Syria or Iraq to join ISIL insurgents’ that are expected to top the Prime Minister’s agenda. Around 500 Britons are estimated to have travelled to the region, while around half of those are thought to have returned to the UK.

“The focus, particularly given current events in Syria and Iraq and in that region, will be CT [counter terrorism] and ISIL,” the Prime Minister’s official spokesperson told reporters on Monday. “Certainly people travelling overseas from the UK to take part in terror activity is very much part of that relationship we have with [Turkey],” he said.

Cameron is likely to raise the issue of the extent of Turkey’s participation in the US-led coalition against ISIL forces. Ankara has in recent months been accused of sitting idly by while battles rage in neighbouring Syria, despite the fact Turkey shares almost 800 miles of borders with both Syria and Iraq.

Specific criticism was levelled at Turkey over its lack of involvement in assisting Kurdish forces in the Syrian border town of Kobane, which have been struggling to hold ISIL fighters at bay since September. Ankara has also held discussions with US officials about the possibility of a no-fly zone over northern Syria in exchange for American use of its Incirlik airbase in Adana, south Turkey.

Erdogan, however, will aim to convince the British Prime Minister that western forces need to extend their campaign to depose Syrian President Bashar al Assad from power, something which has been frequently rejected by the West since the rise of ISIL. The Turkish President has been highly critical of western allies for switching focus from tackling Assad to the ISIL threat.

Cameron’s visit comes a week after Russian President Vladimir Putin met Erdogan to discuss trade deals and the crisis in Syria, of which the two men have diametrically opposing views. This, however, hasn’t stopped them from agreeing on increased sales of Russian gas to Turkey and building an alternative to the now redundant South Stream gas pipeline.

Another visitor to Ankara this week is Federica Mogherini, the new European Union foreign affairs chief, who will meet Turkish leaders and visit a refugee camp on the country’s southern border. Her visit, along with US Vice President’s recent trips to the country, highlights a concerted effort by western partners to engage the Turkish political leadership with the threat posed by ISIL as a serious and credible threat in the region.

An EU statement said: “This joint visit, early in the mandate of the new European commission, demonstrates the importance of Turkey…as a candidate country negotiating accession to the European Union and as a key partner and neighbour considering its strategic location and dynamic economy.”

Although Turkey’s possible future membership of the EU, which Britain supports, is seen as a distant prospect and unlikely to dominate discussions with either Mr Cameron or Ms Mogherini, it may well still come up in the talks. Turkish media reports suggest Ms Mogherini is supportive of Turkey’s early accession to the EU.

“Relations are quite close. The UK has been a vociferous supporter of Turkey’s potential membership of the EU, there is growing trade and cultural ties between Turkey and the UK and there are a growing number of migrants coming to study and live in the UK,” he said.

“However, I think that there are differences, particularly in relation to the scope of the western military campaign in Iraq and Syria. I suspect that Prime Minister Cameron will try to convince his Turkish counterparts to step up efforts in combatting the Islamic State in Iraq and Syria, particularly more effective control of the borders, the flow of fighters, weapons and so forth.”

Although Mr Cameron’s visit to Turkey is unlikely to end on a sour note, the possibility of resolving their differing attitudes to the Syrian crisis is remote.