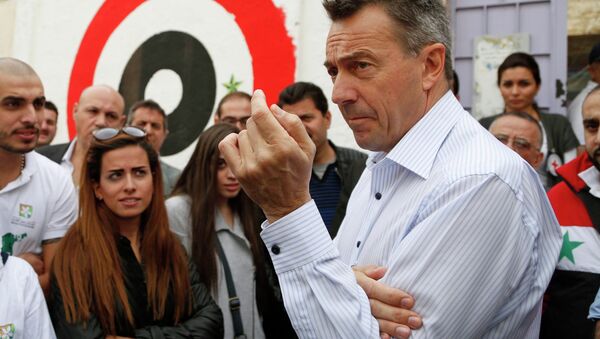 ICRC President Peter Maurer stated that ICRC may allocate $48 million for Ukraine in 2015 to help people cope with the serious humanitarian crisis in the country.

“We are also in the process of trying to get informed, as you know, in those areas where we are faced with mass graves, missing [people], ICRC is considering the support of the respective authorities which take the lead to investigate. We are not an investigation agency, but we need a political consensus to investigate,” Maurer told Sputnik in an interview.

“All parties involved in Ukraine are aware that the ICRC has the necessary skills and protocol to deal with missing people. So this is the state of this issue at the present,” he added.

New Report on Human Rights in Ukraine to Cover Period Up to October 31: UN
Reports of the discovery of a mass grave emerged on September 23, when it was found near the village of Nyzhnia Krynka, just outside the city of Donetsk. According to the latest reports, the graves contained around 400 bodies.

Independence supporters of southeastern Ukraine claim that the massacre was carried out by Ukraine’s National Guard fighters, who had been in the area since April, when Kiev began the military operation in the region. Ukrainian authorities have denied the accusation. Overall, the confrontation between Kiev authorities and local militia in eastern Ukraine has claimed the lives of over 4,000 people, according to the UN, hundreds are still missing.

Russian President Vladimir Putin and head of the Organization for Security and Co-operation in Europe Didier Burkhalter have called for a thorough investigation into the mass grave. In October, the Russian Investigative Committee claimed it had irrefutable evidence of Ukraine’s National Guard and the Right Sector nationalist group’s participation in the mass killings.

ICRC Asks Donors for Over $1.68Bln to Help People Caught up in Conflicts
The International Committee of the Red Cross (ICRC) may allocate $48 million for Ukraine in 2015 to help people cope with the serious humanitarian crisis in the country, ICRC President Peter Maurer told Sputnik Monday.

"It is a very difficult situation, it is the reason why the ICRC has invested into a major winterization program in all parts of Ukraine, including in the Donbas. We started the year with zero budget on Ukraine and we have now a proposal for 2015 for $48 million budget for Ukraine, which is the tenth largest operation of the ICRC worldwide," Maurer told Sputnik in an exclusive interview.

"We have said consistently for the past couple of months that the situation in Ukraine is increasingly developing into a serious humanitarian crisis," he added.

Maurer said the ICRC is working closely with the Russian Red Cross to help them deal with the large number of Ukrainian refugees.

New Russian Humanitarian Convoy for Donbas Ready for Departure: Ministry
"We have been engaged and active to be present [for] the whole of the country to work with the Russian Red Cross in order to deal with the refugees and to support them in their effort to cope with the refugee populations," Maurer said.

When commenting on the ICRC's work in eastern Ukraine, Maurer said they have repeatedly been in and out of Luhansk and Donetsk, only recently managing to reopen facilities in those regions.

Maurer said the ICRC is cooperating with both eastern Ukrainian regional authorities and with the Kiev government.

Ukraine Remains at Epicenter of New Cold War: Scholar
According to Maurer, continuing shelling and fighting in eastern Ukraine seriously hinders the ICRC's attempts to cope with the difficult humanitarian situation in Ukraine.

"The fighting still persists which is a great worry for us in particular, because the civilian population is suffering from the fighting and displacement and ten humanitarian actors on the ground have difficulties to cope with the security situation," he stated.

In April, Kiev military forces began a military operation against independence supporters in eastern Ukraine who refuse to recognize the legitimacy of a new government they insist came to power in a February coup. According to the UN, the confrontation has claimed the lives of over 4,000 people. On September 5, the opposing sides reached a ceasefire agreement at a Contact Group meeting in Minsk. However, both sides have since repeatedly accused each other of violating the truce.

Due to the conflict, Ukraine's southeastern regions are dealing with an urgent humanitarian crisis, with many people struggling without basic human needs.