What Would Happen If McCain Armed Ukraine? 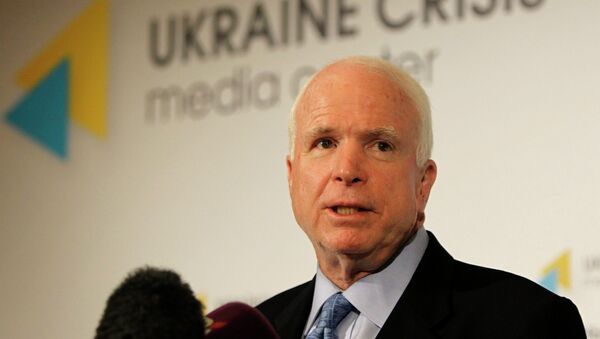 © AP Photo / Sergei Chuzavkov
Subscribe
John McCain has confirmed that the Senate will consider the delivery of lethal military aid to Ukraine when Congress reconvenes in January. Should it agree to do so, the Civil War in Ukraine will almost certainly re-erupt, and Russia and the US will be plunged into an even deeper level of Cold War.

The idea to formally arm Ukraine had been floating around since earlier this year, but US President Barack Obama decided against it. However, this was nothing more than a diversion, since Congress can call upon the President to do so and then potentially reverse any veto he may theoretically deliver. Also, there are certain benefits to having Congress propose the initiative, since it makes it look less aggressive than if Obama unilaterally decreed it, and it also stretches out the process and thereby allows the US to strategically use it as a bargaining chip in the larger New Cold War against Russia.

McCain’s announcement came less than a week after the House passed Resolution 758 which condemned Russia for its alleged aggression in Ukraine, Georgia, and Moldova, in what many have assessed as America’s declaration of a New Cold War. Never one to let a good crisis to go waste, McCain seized the initiative (likely coordinated in advance with the Departments of State and Defense) to publicly declare that the Senate will reconsider arming Ukraine next month, thus taking full advantage of the anti-Russian hysteria sweeping the country and all but guaranteeing that the motion will meet with barely any public backlash. Since the proposal could be rubber stamped as early as next month, the only thing preventing its implementation would be a behind-the-scenes intervention by State and Defense Department representatives to ask Congress to delay it or a veto by Obama, both of which seem extremely improbable.

If McCain and his establishment buddies get their way, sending arms to Ukraine would formalize what has already been long known — namely that the conflict has become a US proxy war against Russia. It cannot be discounted that Ukraine will also be granted major non-NATO allied status at this time, thereby putting it on par with countries such as Israel, Japan, and Australia when it comes to American defense priorities and arms sales. Bestowing such a designation onto Ukraine will embolden its leadership to violate the shaky ceasefire (if it can even be called that after more than 1,000 people have been killed since its signing) and perhaps even launch a surprise strike on the de-facto independent regions. This would harken back to what Saakashvili did in 2008 against South Ossetia, and it mustn’t be forgotten that he, just like Poroshenko, was a pro-American leader who came to power on the heels of a Western-friendly ‘revolution’. The 2008 War made Russian-Western relations chilly, but any continuation war in Ukraine under the presently tense circumstances would plunge them into an even deeper freeze than they are now.

Moscow would certainly have to react if the US took it upon itself to unilaterally arm Ukraine, since aside from the destabilizing effect this would have on the Civil War’s ‘ceasefire’, it could also motivate other NATO states to do the same, thereby de-facto turning the country into an Atlanticst arms dump pining for problems. Since Russia has seen the writing on the wall and understands that this process might be inevitable, it’s already calculating its response to ensure that it won’t be the predictable knee-jerk one that the West is envisioning. This means that although Russia may step up its materials support to the Donetsk and Lugansk People’s Republics, it will also react in unpredictable ways that could not have been popularly foreseen. It’s anyone’s guess what these may be (perhaps an expansion of counter-sanctions?) and whether they’ll remain in the covert sphere or break through the surface into the realm of official policy, but be on the lookout for something asymmetrical to complement the response that the West is waiting for. Russia isn’t anyone’s fool, and with over a thousand years of history, it surely won’t be played like one either.