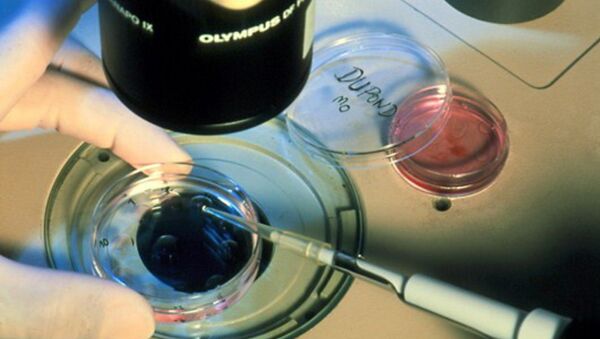 © East News / PGT
Subscribe
A Japanese woman who had her eggs harvested 12 years ago has given a birth to a healthy child. Experts note that a growing number of Japanese women are freezing their eggs in order to build a successful career first.

Japanese Artist Creates Most Romantic Marriage Proposal With GPS Technology
MOSCOW, December 6 (Sputnik), Ekaterina Blinova — A Japanese woman who had her eggs harvested almost12 years ago has given a birth to a healthy baby boy.

"A 30-year-old woman has successfully given birth to a child using an egg she had frozen 12 years ago because she was undergoing a cancer treatment that could have made her unable to reproduce, a researcher who helped her said Friday," Kyodo reported.

In 2001 the woman, then a high school student, was suffering from malignant lymphoma, Masashige Kuwayama, a scientist at Repro-Support Medical Research Centre in Tokyo, explains. A treatment program prescribed by her doctors included tumor-fighting medicines and a bone-marrow implant. Since the drugs could negatively affect the woman's ability to reproduce, medics offered to have her eggs harvested and frozen before the cancer treatment. For 12 years, her two eggs have been stored at a Tokyo medical center, frozen with liquid nitrogen, at 196 degrees below zero.

Japanese Scientists Make First Step to Cure Kidney Disease
The woman successfully beat the disease and 12 years later her eggs were thawed and used for external fertilization, the media outlet notes. As a result of the procedure, she gave a birth to a healthy boy in August 2014.

"I'm very happy every day after giving birth to my child. I’d like all patients with blood diseases to have hope and receive treatment," the woman said as quoted by Kyodo.
It is worth mentioning that it is exceptionally rare in Japan to use eggs, which have been frozen for over ten years, for external fertilization. However, the operation has proved effective.

Earlier this year Kyodo reported that a growing number of Japanese women had become interested in preserving their eggs cryogenically, citing concerns regarding reproductive function decline and a necessity to build a career. "I want to prioritize my career right now, so egg freezing is like taking out insurance for the future," a 30-year old Japanese woman said as quoted by the media outlet.

Repro Self Bank, a Japanese private company, that started its egg-freezing program in May 2013, has already received requests from more than 500 people.

"Many women have a sense of urgency, wanting to freeze their eggs right away. Considering the physical strength needed to give birth and raise a child, it is better to become pregnant by natural means before around 34 years of age," said Koichi Kyono, the head of Kyono Art Clinic.

"Women may feel relieved by freezing their eggs, but they need to be aware that not only eggs but also the womb and veins get old. I want them to have a clear understanding of the risks involved in having their baby later in life," said Ran Kawai, a 54-year old Japanese journalist as quoted by Kyodo.