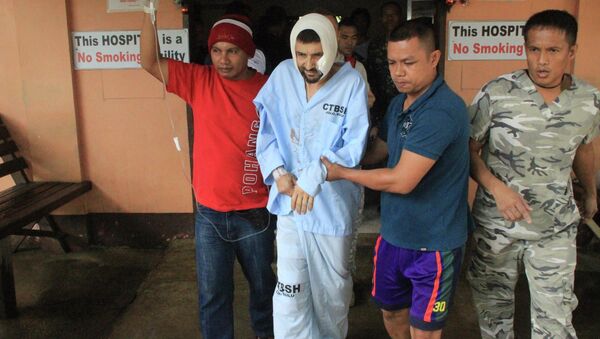 The captured Swiss had been held for two years by Islamic extremists after being seized on a bird-watching trip.

American Hostage Killed in Failed Rescue Operation in Yemen
MOSCOW, December 6 (Sputnik) – A Swiss hostage who was seized three years ago by Abu Sayyaf extremists has managed to escape from captivity during a shootout between the Islamists and the Filipino military, a spokesman for the Philippines forces announced.

Lorenzo Vinciguerra "found an opportunity to escape because of the running gunbattle with our troops," Colonel Restituto Padilla told AFP, adding that the clash took place on the remote island of Jolo and that Vinciguerra was picked up by Filipino soldiers.

The Swiss was abducted along with Dutch national Ewold Horn in February 2012 in the Tawi Tawi province while they were on a bird-watching trip. The men, reported to be 47 and 52 at the time of their capture, were then taken to Jolo Island by boat, during which their Filipino guide jumped into the sea and escaped.

Colonel Allan Arrojado of the Filipino army told Reuters that Vinciguerra urged to Horn to also make his escape, but that the Dutch man was “very sick and very weak” and unable to do so, adding that his current condition remains unknown.

Arrojado told reporters that the Swiss wrested a machete from his guard during the battle between army forces and the militants, and used it to attack him before running away: “He dashed while other bandits were shooting at him,” said the army commander.

Philippines Authorities Evacuate Over 600,000 аs Ruby Typhoon Approaches
According to the BBC, Vinciguerra is currently in a military hospital receiving treatment, having been wounded by the extremists as he fled. His injuries are not said to be life-threatening.

The Abu Sayyaf is an Islamist group with links to al-Qaeda which is based in the southern Philippines, where the Muslim population of the predominantly Christian archipelago nation is most numerous. Al-Jazeera reports that the group are holding at least eight other hostages, after the release last month of two German nationals who were captured in April while on a yachting trip.