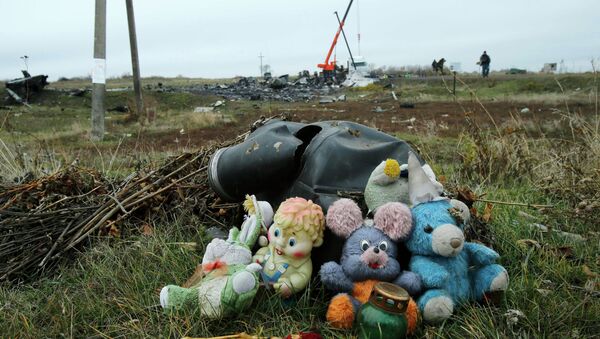 The families of the victims of Flight MH17, frustrated with what they see as the failure of Dutch authorities to investigate the disaster, are demanding that the UN take over the investigation and launch an international inquiry into the tragedy.

Families of Boeing MH17 Victims to Sue Russia, Ukraine, Malaysia, Airline
MOSCOW, December 6 (Sputnik) — The relatives of those died in the July, 2014 Malaysian Airlines Flight MH17 crash in eastern Ukraine are frustrated with what they see as a Dutch mishandling of the investigation into the tragedy.

They are now demanding that the UN take over and launch an international inquiry into the disaster.

Reuters obtained a copy of a letter written by Van der Goen Attorneys on behalf of 20 relatives from Belgium, Germany, the Netherlands and the US, which was sent Dutch Prime Minister Mark Rutte on Friday, accusing Dutch officials of having failed to build a case.

Russia Rebukes MH17 Crash Probe for Violating UN Guidelines
The letter demanded that inquiries by the Safety Board and prosecution service be handed over to the UN, and that Rutte ask the UN to appoint a special envoy to take over.

It said the Netherlands "has completely botched" the fact-finding investigation and the legal framework of the case.

Dutch prosecutors have been unable to access the crash site, which is located on the front lines of a war zone in eastern Ukraine which is disputed by Ukrainian troops and Russian-backed rebels, and haven’t met international requirements to secure evidence, the letter said.

"Nobody knows who is doing what," Reuters quotes said Bob van der Goen, a spokesman for the law firm, as saying. "There is no coordination, there is no leadership whatsoever [by] Holland."

Mother of German Citizen Killed in MH17 Crash Sues Ukraine for $1 Mln
According to the letter, an international inquiry is the only way to identify who shot down the plane and ensure that those responsible are brought to court.

Rutte said on Friday that the Dutch teams were returning to the Netherlands.

"We have done everything we could. In view of the safety situation and the weather, we cannot do anything more right now," Reuters quotes him as saying.

On July 17, Malaysia Airlines Flight MH17 crashed in eastern Ukraine while en route from Amsterdam to Kuala Lumpur, killing all 298 people onboard, including 38 Australians. Kiev authorities have accused independence fighters from the self-proclaimed Donetsk People's Republic (DPR) and Luhansk People's Republic (LPR) of shooting the plane down. The authorities said that they do not have weapons which are capable of shooting down an aircraft flying at the usual altitude of a Boeing 777.

A preliminary report released by the Dutch Safety Board stated that Malaysia Airlines Flight MH17 was hit by numerous external objects, but there was no evidence of technical shortcomings or crew error and an additional investigation was required to better understand the causes of the crash and find those responsible for the tragedy.