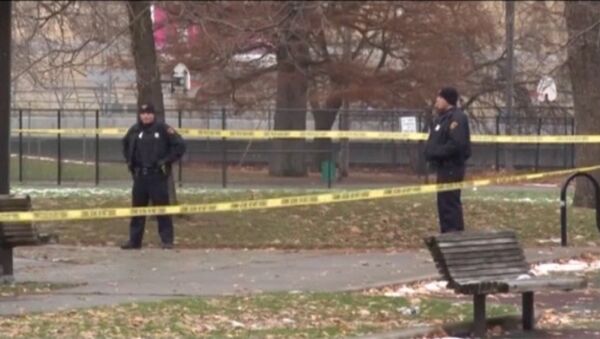 Subscribe
According to court documents, the family of a 12-year-old African-American boy killed by a police officer in the US city of Cleveland have filed a civil lawsuit against two police officers and the city.

The lawsuit filed Friday claimed police officers Timothy Loehmann and Frank Garmback applied "unlawful and unnecessary force" when they confronted Tamir Rice, 12 as he played with a legal and unregulated air-soft toy gun in a Cleveland park on November 22. As a civil lawsuit, the plaintiff is demanding compensation from the police officers and the city of Cleveland.

Last month Cleveland police released a video of the shooting and the audio recording of a 911 call, which prompted police to arrive at the scene. In the 911 audio, a man said that "probably a juvenile" was brandishing a "probably fake" weapon and pointing it at people. Officers arrived at the scene within several minutes.

The video showed Rice wandering around playing in the snow with the toy gun. A police car then pulled up and within one or two seconds Rice was shot twice from a distance of less than ten feet.

The lawsuit says that the officers had "ample opportunity to safely provide clear, unhurried commands to the startled young boy but instead rapidly confronted him with their cruiser and their guns and shot him all within two seconds."

According to the officers' statements and initial police reports, Rice allegedly pulled out his toy gun and was then shot at twice by officer Loehmann from the passenger side of the police car, following three warnings to put down the weapon.

The incident was followed by several hundreds-strong demonstration, which blocked traffic in Cleveland.

Meanwhile, cities across the United States have been shaken by mass protests against police brutality and racial profiling, following the killing of African-American Eric Garner,43 in New York City in July and the fatal shooting of Michael Brown, 18 in Ferguson, Missouri in August, both committed by white police officers. In both cases, grand jury decided not to indict the law enforcers.