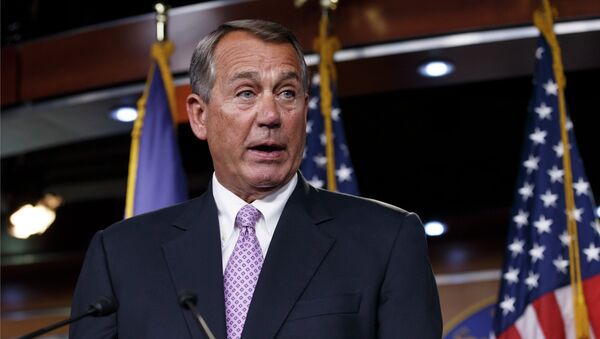 © AP Photo / J. Scott Applewhite
Subscribe
The unemployment rate remained has unchanged change since October and continues to stand at 5.8 percent, according to a report published by the US Department of Labor on Friday.

US Economy Expands 3.9% in Q3 on Consumer Spending
MOSCOW, December 5 (Sputnik) — Millions of Americans and middle-class households in the United States are still jobless and continue living on inadequate wages despite a decrease in the number of unemployed people in November, US House of Representatives Speaker John Boehner said in a statement on Friday.

"While it's welcome news that more people found work last month, millions still remain out of work, and middle-class families across the country, including my home state of Ohio, are struggling to get by on wages that haven't kept pace with rising costs," Boehner was quoted as saying in the statement published on his website.

The US Department of Labor on Friday published a report in which it said a total of 321,000 people found employment in the month of November. However, it said the unemployment rate had not recorded a change since October and continues to stand at 5.8 percent.

High Productivity, Low Wages in US Could Expand Income Inequality in Canada
In his statement, Boehner went on to blame US President Barack Obama for the latter's unchanging attitude to the situation.

"The president's response has been more of the same: the same massive regulations, the same rising premiums, and the same uncertainty for manufacturers and small businesses," Boehner continued.

The report by the US Department of Labor shows that nonagricultural and private wage and salary workers compose the largest group of unemployed people in the United States.