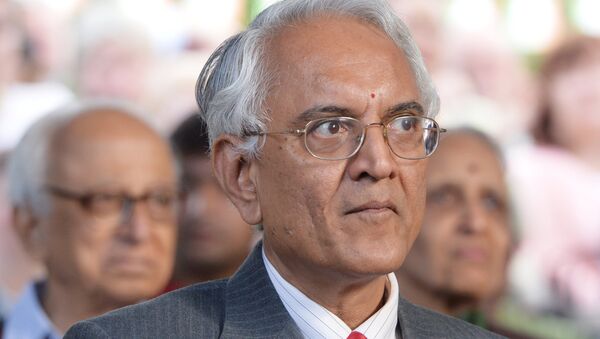 In an interview with Sputnik, Indian Ambassador to Russia P.S. Raghavan told Sputnik that the two countries will continue to strengthen bilateral economic cooperation despite Western sanctions.

“There are particularly exciting opportunities to enhance our economic cooperation to a level commensurate with the complementarities between the economies of our two countries,” the ambassador said. He noted that while Russian-Indian economic relations are far from having reached their full potential, “conditions are in fact very favorable for a quantum jump in trade and investment flows.”

The ambassador attributed the current levels of bilateral trade and investment, which amount to only about $10 billion a year, to a lack of familiarity, saying that there is a “lack of full awareness about the opportunities available in the Russian market for the Indian business community and vice-versa.”

Raghavan noted that the two countries are “working on a number of initiatives to promote more efficient information flows between the two countries, including stronger cooperation between regions.”

The ambassador’s remarks come ahead of a planned visit by Russian President Vladimir Putin to India next week. The annual summit between the leaders of India and Russia, which has occurred regularly since 2000, is set to be the most comprehensive meeting between Putin and Prime Minister Narendra Modi to date. Raghavan explained that the summit will be a chance for the two leaders “to articulate their vision for the course of our strategic and privileged partnership in the coming years,” with plans for a further strengthening of cooperation in areas such as defense, nuclear energy, space, trade and investment, energy and other resources, science and technology, health, education, media and culture. The visit is expected to result in the signing of over a dozen documents related to Russian-Indian cooperation, and “will provide fresh impetus to our already-vibrant bilateral relations,” according to the ambassador.

The meeting, which was agreed upon last month at the APEC Summit, will take place December 11, and will be Putin’s third meeting with Modi; the two leaders had met earlier at the BRICS Summit in July.

Speeding Up the Development of Economic Relations

India 'Uniformly Happy' With Defense Equipment Supplied by Russia: Envoy
Raghavan mentioned a number of concrete initiatives aimed at improving the investment and trade environment. He noted that India’s Ministry of Commerce and Industry has carried out a detailed study of the proposed North-South Transport Corridor, a proposed major trade route running from Mumbai, India through the port of Bandar Abbas in Iran, to Astrakhan via the Caspian Sea. He noted that this route “has the potential to transform trading relations between our two countries,” and that Indian exporters, freight forwarders and shipping companies need to be encouraged to use the route to make it financially viable.

The ambassador also noted that Russia’s assistance in joint manufacturing projects, both for civilian and defense applications, is fully in line with Prime Minister Modi’s ‘Make in India’ initiative, which aims to attract global business to invest in manufacturing in India.Raghavan stated that the Indian and Russian central banks are presently working on plans to settle transactions in the countries’ national currencies, with the aim of enhancing economic and trade relations. He added that India’s Export-Import Bank and the Russian development bank Vnesheconombank are in talks on facilitating loans in local currencies to companies seeking to invest in the two countries.

India to Give Green Light to Buffalo Meat Exports to Russia: Ministry
The ambassador notes that India is very interested in the Eurasian Economic Union, which will enter into force in January, saying that India is presently working “to create concrete institutional mechanisms…for structured discussions on [economic cooperation] between India and the Union.”

Discussing the impact of the sanctions war on Russian-Indian relations, the ambassador noted that India “will not tolerate pressure from anywhere to change our longstanding relations with Russia,” and that it has proven over the last several years “that it does not kneel under the external pressure of any country.”

Raghavan noted that Russian-Indian relations, which are “built on shared convictions [and] strategic convergences [of views] on major issues of international concern,” are “not determined by external factors.”

The ambassador also noted the emergent role of new institutions aimed at creating a multipolar world, particularly BRICS. He noted that this organization, which constitutes 21 percent of global GDP, 42 percent of the world’s population, and 30 percent of its land area, has vast potential in restoring “a climate of peace and stability in the world,” noting not only its economic potential, but also its power to affect change in other areas. These include the reform of the UN Security Council, a reform of the WTO, and counterterrorism, cybersecurity and climate change initiatives.

Raghavan’s friendly and optimistic tone ahead of the planned bilateral summit matches that set by Russian Ambassador to India Alexander Kadakhin, who told Sputnik on Wednesday that India is ready to supply Russia with significant amounts of food products, and that Western sanctions and Russian countersanctions are opening many opportunities for Indian businesses looking to enter the Russian market.