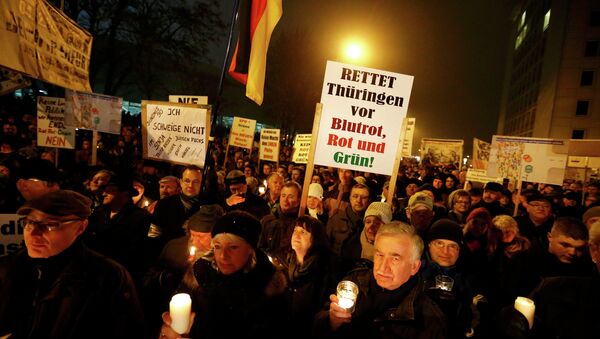 © REUTERS / Kai Pfaffenbach
Subscribe
Protesters gathered in Erfurt, Germany on Thursday evening to protest a vote Friday which may result in the election of Left Party leader Bodo Ramelow to the leadership of Thuringia's state assembly.

MOSCOW, December 5 (Sputnik) — About 2,000 people gathered in the east-central German city of Erfurt on Thursday to protest against a state assembly vote on Friday which may result in the election of Left Party candidate Bodo Ramelow to the position of Minister-President of Thuringia’s state assembly, Deutsche Welle reports.

The east-central German state, once part of East Germany, faces the prospect of a left coalition government that would be led by the Left Party, the successor of the East German Socialist Unity Party, and would include the Social Democrats and the Greens. Ramelow’s election would mark the first time the left has led a state government since the unification of Germany.

Angela Merkel’s Christian Democratic Union (CDU) faces the prospect of the end of her party’s rule in the state; her party has successfully controlled it in the 24 years since unification. Chancellor Merkel’s Education Minister Johanna Wanka told German television earlier this week that she “can’t stomach the thought” of Ramelow’s election. Meanwhile, German President Joachim Gauck, a former pastor and dissident from East Germany, said last month that “people of my age who lived through the GDR [the German Democratic Republic, East Germany] find it quite hard to accept this,” according to Deutsche Welle.

The CDU is said to fear the prospect of a left coalition government in Thuringia as a ‘blueprint’ for similar alliances at the federal level, which would threaten the Christian Democratic/Social Democratic coalition government, which formed for the third time last year following national elections, Reuters explained.

In order for Ramelow’s three-party left coalition to elect him to the position, every one of the three left parties’ members would have to vote to approve him via secret ballot, since they lead by a majority of only one seat in the state’s 91-seat state assembly.

Ramelow, a trade unionist and West German native who moved to the country’s east after unification, has himself described the coalition agreement between the three left parties as a “milestone” and a “turning point,” carefully adding that “I’m not a representative of East Germany and my party isn’t a club of nostalgists who want to resurrect East Germany,” DW reports.

The three-party left coalition, known as the Alternative for Germany, has been described by Reuters as anti-euro, anti-NATO and pro-Russian. Deutsche Welle has explained that the coalition government would aim to focus on the creation of a program to offer free kindergarten, put more money into education, focus on renewable energy resources, run a debt-free budget, and limit the powers of the country’s intelligence agency in recruiting informers.

The Left Party was founded in 2007 following the merger of the Party of Democratic Socialism –the successor to the Socialist Unity Party which ruled East Germany, and the Electoral Alternative for Labor and Social Justice, which had broken away from the country’s Social Democratic Party. Its growing popularity among voters in the East since then has been explained as the result of the continuing problems of integration between the East and West, with issues like lower salaries, the emigration of youth, and high unemployment rates continually plaguing the east, along with the perceived imbalances of political and economic power and inequality of opportunity.