Orion Among the Stars as We Reach Toward Mars 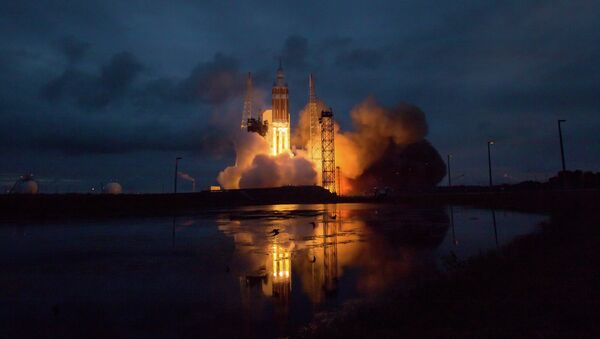 The dream of sending humans to the Red Planet got a step closer to reality today with the successful launch and return to Earth of NASA’s Orion unmanned spacecraft.

Just after 7 AM ET, the capsule lifted off amid clear skies aboard a Delta IV heavy rocket, the most powerful rocket currently in production.

The spacecraft coasted outside the atmosphere to a height of about 5,800 kilometers, enough to get the spacecraft into the Van Allen radiation belt. Any humans who someday venture into deep space must pass through this region — and survive the intense radiation.

The mission amounted to a four and a half hour flight that twice encircled the globe, moving at speeds of 32,200 kilometers per hour.

For this mission, there was no crew aboard. The capsule was packed with sensors to measure every conceivable aspect of the conditions it was experiencing as it hurtled towards the stars. During the test, Orion penetrated the Van Allen belt — twice. The capsule ultimately splashed down into the Pacific about 1,000 kilometers southwest of San Diego, helped along the way by giant parachutes.

“Today’s flight test of Orion is a huge step for NASA and a really critical part of our work to pioneer deep space on our Journey to Mars,” said NASA Administrator Charles Bolden.

“The teams did a tremendous job putting Orion through its paces in the real environment it will endure as we push the boundary of human exploration in the coming years.”

NASA says Orion will “open the space between Earth and Mars for exploration astronauts. This proving ground will be invaluable for testing capabilities future human missions to Mars need. The spacecraft was tested in space to allow engineers to collect critical data to evaluate its performance and improve its design.”

But NASA isn’t the only organization dreaming of putting an astronaut on Mars. Paying close attention to today’s launch were the founders of Mars One, a private concern that is aiming to be the first to the Red Planet. It’s a non-profit organization whose mission is to colonize Mars and create a permanent human settlement there. According to their plans, teams of four astronauts would travel to Mars every two years starting in 2024. They would build their habitat by connecting modules together as each successive mission lands. By 2033 the goal is to have at least 20 people living and working in the Martian community.

Mars One has generated a lot of publicity. More than 200,000 people worldwide have applied to be voyageurs on what media are calling a one-way “suicidal mission”.

“I had this empty feeling, as if I was waiting for something, waiting for my life to start for real at last,” Anastasia Stepanova, a Muscovite who applied to be on the crew roster, told Russia Today.

“It grew worse every year as I started to feel that my whole life would be like this."

When she heard about the Mars One project, she said: "I felt better and better, it was as if my apathy was abating. I thought, 'Anastasia, you dummy, that's what you needed.'"

Powerful desires to be an extraterrestrial aside, there are some serious risks to flying so far into space.

"I believe that these people are not professional in space science and technology," said Igor Mitrofanov of the Space Research Institute at the Russian Academy of Sciences. "Because would they be professional, they probably would not make this application, because they would have known how difficult this is and what big risk is associated with this attempt.”

Mitrofanov says a big hazard any future astronauts will face is a big dose of radiation from the Van Allen belt. That’s something NASA is working on.

When humans finally do set foot on the Red Planet, both public and private interests will both surely have played a role.