Ash Carter: The Strategist Who Will Turn Up Heat in America's Cold Wars 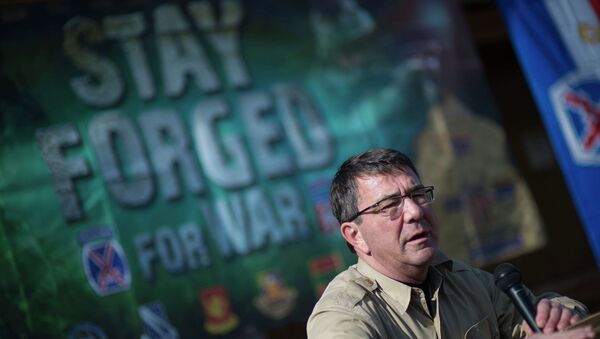 President Obama has nominated Ashton Carter as the new Secretary of Defense. Although chided for being an academic, Carter’s experience proves that he’s actually a lethal strategist, and will fit in perfectly as America launches two Cold Wars in Eurasia and expands its hot ones in the Mideast.

Carter inherits a complex international environment from outgoing chief Chuck Hagel, but his main goal (as was his predecessor’s) is to prolong the US’ worldwide dominance as long as possible. To do this, America is now waging Cold Wars against both Russia and China, while deepening its involvement in the Mideast, the soft underbelly of Eurasia. Altogether, this three-way approach is envisioned by the Pentagon as being the recipe for ‘America’s decline’, the oft-cited and misleading characterization that serves as the domestic justification for all of this. Just as deceptive, however, is the characterization that Carter isn’t up for the job, since he’s more than qualified for leading the US’ pan-Eurasian campaign.

Carter is one of the co-authors of the 1999 publication, ‘Preventive Defense: A. New Security Strategy for America’, which lays out what will likely be his military mantra once in office. The concept could be more accurately described as proactive war, either through conventional or asymmetrical means, to halt future threats to the US’ security. At the time of its publication, he identified some of them as being “Weimar Russia”, “A Rising China Turned Hostile”, and “Catastrophic Terrorism”, which nowadays reads like a checklist of the US’ three main foreign policy priorities – Russia, China, and the Mideast.

One of the defining elements of global affairs this century will be the two Cold Wars that the US is simultaneously engaged in. Here, too, Carter is an asset, since he actually has pivotal experience that makes him the perfect candidate for carrying them out.

The Pentagon’s next leader used to serve as Assistant Secretary of Defense for International Security Affairs from 1993-1996, charged with responsibility over the former Soviet republics, the strategic affairs surrounding them, and their nuclear weapons. All three of them should be equally emphasized, since they all relate to the present day. Carter’s knowledge of the area and its affairs enables him to better craft America’s new military strategy towards them, including the use of America’s nuclear deterrent and the abrogation of Russia through the Missile Defense Shield, which Putin just said was one of the greatest threats to international security.

During his previous tenure at the Pentagon as Deputy SecDef, Foreign Policy described Carter as “the Obama administration’s point man on the pivot-to-Asia strategy”. This he likely earned through his support of the strategy even before it was officially announced in 2011, initially laying it out its framework in his 1999 ‘Preventive Defense’ publication. His biography also shows that he was responsible for carrying out two major reviews of the defense strategy and budget, which included the Pivot to Asia. Thus, although he may never have served time on the ground in Asia, he has a solid grasp of the continent’s ‘bigger picture’, which in turn enables him to craft the US’ pivotal military strategy for this century.

To add icing to the cake, Carter’s experience as the Assistant Secretary of Defense for International Security Affairs helped him establish concrete connections with governments in Europe, Africa, and the Mideast, as well as with multilateral organizations such as NATO. This is very important for a few reasons.

The US-Russian Cold War is fought in Europe, part of the US-Chinese one is over African resources and markets, and finally, the Mideast sits in the geographic center of both Cold War theaters and is thus a pivot between them. Any consolidation of American influence there (or conversely, all out chaos) can spread to Europe and Asia, thereby affecting the dynamics of both Cold Wars there.

Another important detail about Carter’s former position is that it helped him direct America’s alliance system through his interaction with NATO and other pro-US governments. Although this was only formally relevant for the previously mentioned regions, Carter can of course take his experience to Southeast and East Asia and combine it with his Pivot to Asia strategy. This could see the creation of anti-Chinese defense alliances (either in form or in fact) created in the region, much like how NATO and the Gulf Cooperation Council are used against Russia and Iran, respectively. In the case of the Asia Pivot, the infrastructure is already there, since the US is in mutual defense agreements with Japan, South Korea, and the Philippines, thus raising the possibility for a more multilateral alliance or a Southeast Asian offshoot of Washington’s relationship with Manila (either with direct American participation or through a ‘Lead From Behind’ supervisory role).

Turning Up The Heat

Last but not least, Carter is expected to preside over an escalation of the US’ military involvement in the Mideast, either directly or through proxy. In the past, his LinkedIn profile lists him as having “led huge manufacturing and logistics programs to successful completion, including… the 2010 "surge" in Afghanistan (building more than 200 new bases and delivering 8,000 new MRAP armored vehicles to theater in 16 months).”

With the US stealthily rebuilding its military presence in Iraq and supervising the buildup of Iraqi forces (official and militia) and possible regional military ones there in anticipation of next year’s anti-ISIL counter-offensive, he can of course transfer his experience with the Afghan surge over to that theater.  No matter which form it takes, it is certain that a large-scale battle will take place in Iraq next year to oust ISIL from its positions in the western part of the country, possibly even carrying over the border into Syria and transforming into a regime change operation.

It doesn’t matter whether American troops are directly involved or not, since in any case, it will be Carter who calls the coalition’s shots, and as was explained above, whether this results in chaos or consolidation, either one will have impactful consequences on the Cold Wars in Europe and Asia.