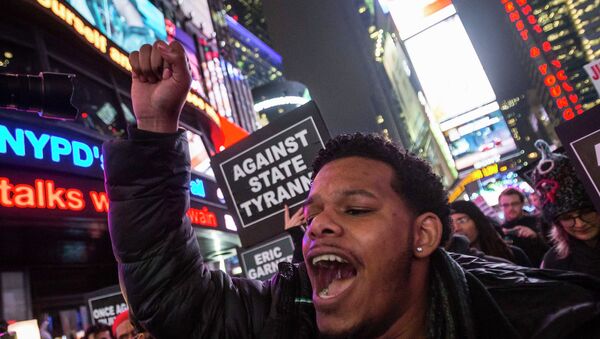 Protest organizer and civil rights leader Reverend Sharpton said that the march on Washington, scheduled for December 13, will urge the US government to change the racist grand jury system.

US Civil Rights Leader Announces March in Washington Over Garner Ruling
WASHINGTON, December 4 (Sputnik) — A March on Washington protest, taking place on December 13, will focus on how the United States can fix a "broken grand jury system” after several US white police officers were not indicted for race-related crimes, protest organizer and civil rights leader Reverend Sharpton said during a press conference on Thursday.

"Marches and boycotts led to the 1964 civil rights act, 1965 voting rights act," Sharpton said. "We hope this march begins a series of efforts that will lead to how we [the United States] redo the grand jury review of policing in this country."

Sharpton called on the federal government to intervene with local police in the recent series of race related injustices in the United States that have caused major protests around the country within African-American communities in particular.

New Yorkers Decide to Lie Down in Protest of Police Brutality
"Federal intervention had to come into the south to protect people's civil rights and voting rights, federal intervention must come now and protect people from state grand juries that keep exonerating any seeking of redress on police violence and that's what the 13th [March on Washington] is about,” Sharpton added.

Reverend Sharpton announced his plans to lead the march during a press conference earlier on Wednesday after a New York grand jury decided to not indict white police officer Daniel Pantaleo, who suffocated African-American man Eric Garner to death by putting him in a chokehold.

Following the New York grand jury's ruling, US Attorney General Eric Holder announced on Wednesday that the Department of Justice would begin an "independent, thorough, fair and expeditious investigation" into Garner's death, an investigation that Sharpton said he was hopeful about.

Protests have spread around the country, following the Garner verdict, similar to the ones after last week's grand jury ruling in Ferguson, Missouri to not charge white police officer for fatally shooting unarmed African-American teen Michael Brown.

The August killing of Brown and the grand jury decision started protests around the United States that reignited the debate over police brutality and racial profiling in the country.