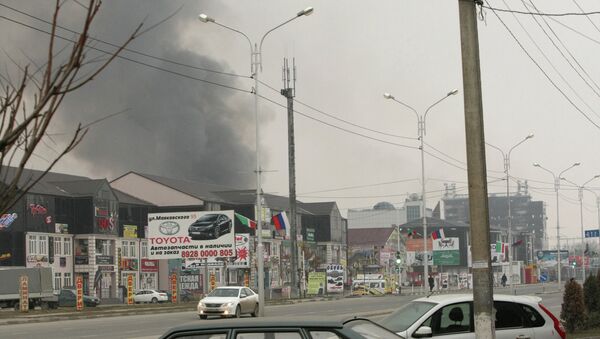 A group of 50 experienced investigators and forensic experts has been set up to investigate a heinous attack in the Chechen capital, Grozny, that killed 10 and wounded 28 police officers.

According to Markin, a group of 50 experienced investigators and forensic experts has been set up to investigate a heinous attack in the Chechen capital, Grozny, that killed 10 and wounded 28 police officers.

"A thorough search of the site has been carried out to find evidence related to the case," Markin said in a statement.

Russia
Putin: Chechnya Will Successfully Cope With Recent Surge in Terror Activity
"Efforts have been made to establish identities of the attackers," he added.

Russia's National Anti-Terrorism Committee earlier said security forces had engaged in fierce gun battles with militants, who holed up in two buildings, including a school, after an attack on a traffic police checkpoint in Grozny.

All ten militants involved in the attack were killed, the NAK said.

In the early hours of Thursday, three cars full of armed Islamist militants attacked a traffic police checkpoint outside Grozny, in Russia's southern Republic of Chechnya. Three police officers died when attempting to stop the cars.

The terrorists later found shelter in the city's Press House and at a nearby school, which was empty. Both buildings were charred in the fire that erupted when security forces engaged in a fierce shootout with the terrorists.

Chechen President Ramzan Kadyrov claimed the militants had links to Doku Umarov, a self-styled leader of Islamist secessionists in Russia's Northern Caucasus who was wiped in a special operation last year.

The brutal attack on the Chechen police came just hours before President Vladimir Putin's annual state of the nation address in Moscow, marring years of comparative calm in the region that went through two wars over the past 20 years.

UN Secretary-General Ban Ki-moon has strongly condemned the attack in a statement released late on Thursday, and offered his condolences to the people and government of Russia.