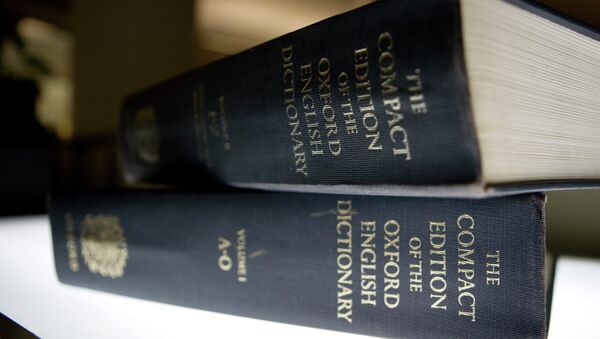 MOSCOW, December 4 (Sputnik) – Oxford Dictionaries Online has added a new list of words to its repertoire.

A few of them are quite entertaining, although as noted by The Time, Oxford Dictionaries' definition of "lolcat," is a "photograph of a cat accompanied by a humorous caption written typically in a misspelled and grammatically incorrect version of English,” perhaps is the funniest entry.

Oxford added about 1,000 new entries this quarter. But it’s important to note that these words are added into the branch of Oxford that reflects modern usage; the words people are using now and how they use them.

The level for entry into the historical Oxford English Dictionary is very difficult, requiring words to prove they have staying power.

Here’s a selection of the new admissions:

al desko (adv. & adj.): while working at one’s desk in an office (with reference to the consumption of food or meals).

digital footprint (n.): the information about a particular person that exists on the Internet as a result of their online activity.

duck face (n.): (informal) an exaggerated pouting expression in which the lips are thrust outwards, typically made by a person posing for a photograph.

five-second rule (n.): (humorous) a notional rule stating that food which has been dropped on the ground will still be uncontaminated with bacteria and therefore safe to eat if it is retrieved within five seconds.

MAMIL (n.): (Brit. informal) acronym: middle-aged man in Lycra. A middle-aged man who is a very keen road cyclist, typically one who rides an expensive bike and wears the type of clothing associated with professional cyclists.

Obamacare (n.): (in the US) an informal term for a federal law intended to improve access to health insurance for US citizens. The official name of the law is the Affordable Care Act or (in full) the Patient Protection and Affordable Care Act.

permadeath, n.: (in video games) a situation in which a character cannot reappear after having been killed. WTAF (abbrev.): (vulgar slang) what the actual f-ck.