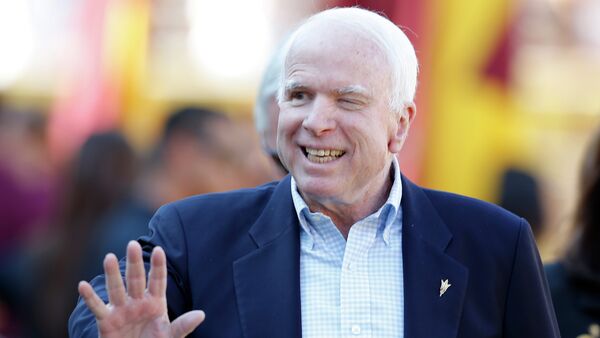 Budapest has summoned the US ambassador to Hungary after US Senator John McCain called Hungarian Prime Minister Viktor Orban a "neo-fascist dictator" who seeks to increase ties with Russia. Pal Tamas, director of the Center for social politics at Budapest University, has commented on this issue.

US State Department Disagrees With McCain’s ‘Colorful’ Remark On Hungary
US Senator McCain said Tuesday that Colleen Bell, a former soap opera producer, who was elected by the US Senate on the same day to represent the United States in Hungary, did not have the right qualifications to be a US ambassador in a country that was "on the verge of seceding its sovereignty to a neo-fascist dictator". On Wednesday, Hungary summoned US ambassador André Goodfriend over McCain's controversial comments. Pal Tamas, director of the Center for social politics at Budapest University, has commented on the issue.

Pal Tamas: Everyone standing against Putin is a hero; those who have good relations with him are fascists. And that is it. McCain acts with a precise plan. After all, elections are in a year, and the Republicans are already preparing to take over the White House. In fact, all his statements are aimed at this. Moreover, the GOP is taking a uber radical stance toward Russia with McCain saying the "weirdest sentences" without having any idea of the situation. One has to realize that he is the very Republican senator who was the first to support Saakashvili during his presidency. McCain avidly takes part in world politics surrounding Russian, but he does not fully understand what he talks about. His presumption is that he has to show to the Obama administration their weaknesses. It is not about whether McCain likes Russian foreign policy or not. It is not also about whether he likes or doesn't like those who are accused – with or without reason – of having good relations with Russia. McCain is an example of the man forced to match the American stereotypes on what is good or bad and to blame Obama. Everything McCain says and does is not aimed against Orban (Hungrary's Prime Minister) or even Putin, but to compromise Obama's image to the American people who are not familiar with world political issues.

Hungary Summons US Ambassador After McCain's 'Neo-Fascist Dictator' Remark
What will be the official response from Budapest to McCain’s statements?

Pal Tamas: Budapest has not even reacted. His words reflect only a personal inner-American opinion. The State Department has pointed out its official position is different.

In late October, the US imposed sanctions against a range of Hungarian officials. Why the US is so annoyed about Hungary?

Pal Tamas: There were only six officials. All of them were linked to the state tax service. Actually, they are heads of the institution. The US has provided no detailed explanations for the accusations to the Hungarian government so far. I suppose, given growing tensions over the EU and Eastern Partnership perimeter and Hungary having a fairly independent policy, the US decided to give a warning sign. The opposition, of course, states that America is powerful, and we have to bear it. For the recent two months, the EU has not spoken for or against the American accusations, pointing to the state institutions as one of its country members. Brussels neither defended nor attacked. I think the accusations were a toe in the water, and they have not led to anything so far.