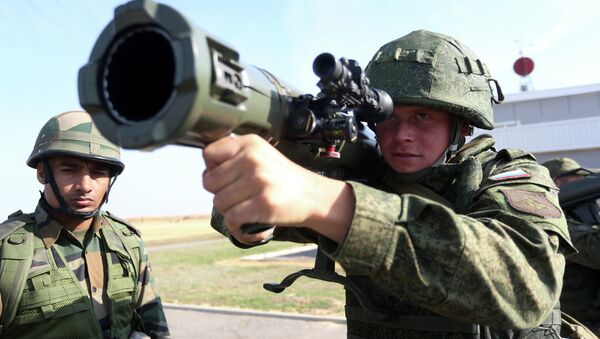 India Wants to Strengthen Cooperation With Russia Amid Sanctions: Envoy
MOSCOW, December 4 (Sputnik) — India is "uniformly happy" with the defense equipment Russia has been supplying to the country, Ambassador of India to the Russian Federation P.S. Raghavan told Sputnik Thursday.

India is Russia's long-term partner in the military field.

Russia's President Vladimir Putin is due to arrive in India on an official visit on December 11. The president will meet with the country's newly elected government to identify new areas of cooperation and strengthen the existing ties between the two countries.

No Link Between Rafale, Mistral Deals With France

The Russian deal with France for two Mistral-class ships is different from India's deal with Paris for 126 Rafale fighter jets, Ambassador of India to the Russian Federation P.S. Raghavan told Sputnik Thursday.

"Mistral is actually a contract that Russia signed with France which is published. It is a well-known fact, and it is close to delivery," the ambassador said, adding that "Rafale was not like that" and there is "no comparison between the two."

According to media reports, back in September India warned it would pull out of the $20-$22 billion deal with French Dassault Aviation company for the supply of 126 Rafale fighter jets if Paris refused to fulfill its obligations under the Mistral contract. This information was later denied.

India Will Not Tolerate Pressure to Change Positive Attitude Towards Russia

India will not tolerate pressure from any country to change its positive attitude toward Russia and Russian —Indian relations, Ambassador of India to the Russian Federation P.S. Raghavan said Thursday.

"India will not tolerate pressure from anywhere to change our longstanding relations with Russia and our longstanding positions on all aspects of Russian-Indian relations," Raghavan said at a briefing dedicated to the upcoming visit of Russian President Vladimir Putin to India.

"India has shown by its actions and statements over the past few years that it does not kneel under the external pressure of any country," he added.

India to Give Green Light to Buffalo Meat Exports to Russia: Ministry
The ambassador noted that India's relations with Russia are "very strong" and "based on a strategic partnership."

Amid the ongoing standoff with the West, Moscow has increased its economic cooperation with the BRICS, Asia-Pacific and Latin America.

Russia's relations with the West have deteriorated significantly over the Ukrainian crisis. The United States and a number of Western countries following its lead introduced several rounds of sanctions against Russia in retaliation to its alleged aggressive policy in Ukraine. The move came despite Moscow's repeated denial of any involvement in the escalating tensions.

In response, Russia has imposed an embargo on food imports from the countries that imposed restrictions against it.

A member of the Russian Civic Chamber's agricultural commission Alexander Khamidullin said on October 13 that India's role as a trade partner with Russia will increase over the course of a one-year food ban.