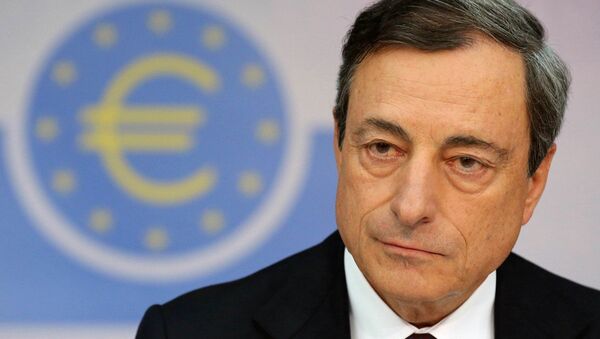 MOSCOW, December 4 (Sputnik) — The European Central Bank (ECB) decided during today’s policy meeting there is no urgent need for expanding stimulus measures to a full-scale bond-buying in the Eurozone, which might be implemented in early 2015, lowering inflation and growth forecasts instead, much to investors’ displeasure.

Draghi: Early next year we'll reassess monetary stimulus achieved, the expansion of the balance sheet and the outlook for price developments

ECB head Mario Draghi held a press-conference in Frankfurt today after the regulator’s policy meeting. The ECB Governing Council has decided, he said, to wait another month or two in order to have more macroeconomic data, allowing the regulator to evaluate the effects of the current selective stimulus measures. The full-scale stimulus might be implemented “early next year”, Draghi said. Meanwhile, the ECB acknowledged that near-deflation and an absence of growth will be the reality in the short-term. The overall macroeconomic forecast for the Eurozone has been lowered till 2016.

Asia-Pacific Stocks Rally on US Data, Europe Flat Ahead of Draghi Speech
The current limited stimulus will have “a sizeable impact on our balance sheet, which is intended to move towards the dimensions it had at the beginning of 2012,” Draghi said as quoted by Bloomberg.

“Should it become necessary to further address risks of too prolonged a period of low inflation, the Governing Council remains unanimous in its commitment to using additional unconventional instruments within its mandate,” Draghi said.

Global Markets Surge on Energy Rebound, EU Edges to Deflation
These layouts explicitly indicate the ECB is not planning to undertake massive easing measures, only adjusting its policies at a gradual pace. The regulator might think challenges to the Eurozone are not acute enough to rush countering them.

Draghi: Need to closely monitor risks to outlook for prices and to be prepared for further monetary policy accommodation, if needed

The ECB interest rate remains unchanged ultra-low, at 0.05%. the regulator has lowered interest rate twice this year, offering cheap money liquidity to banks in order to boost lending and the overall economic activity.

The deposit rate also remains unchanged, at —0.2%, and the marginal lending rate at 0.3%.

“Markets had expected more than the ECB could deliver,” Henrik Drusebjerg of Carnegie Investment Bank AB in Copenhagen. “The ECB needs to see the effects of the current measures implemented and also assess the effect of the significantly lower oil price on the European economy.”

Shares in the European banking sector are going down right now. Disappointed investors are selling shares as their hopes of a massive influx of cheap money into banks from the ECB turned out to be vain.